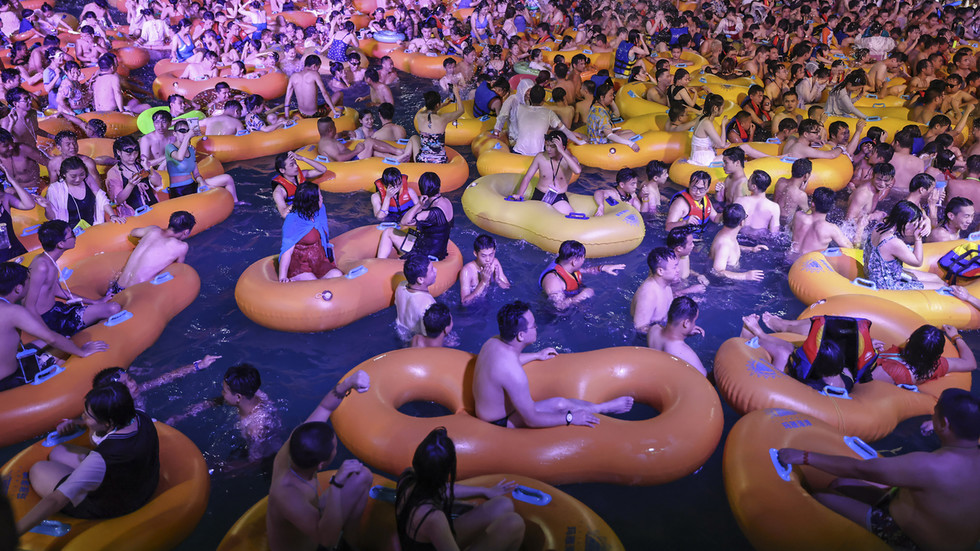 The sight of partygoers in Wuhan, China piling into a water park without masks or social distancing seems like a cruel joke to nations where no measures, however disruptive, seem to be helping against the Covid-19 pandemic.

Wuhan is where the first cases of the SARS-CoV-2 novel coronavirus were first observed in late 2019. The city of 11 million, and much of the surrounding Hubei province, were placed under strict lockdown to halt the spread of the virus. The lockdown included drastic measures such as people getting their front doors welded shut, if one is to believe photos circulating online.

Fast-forward to this past weekend, when AFP published photos and video of an electronic music festival at the Wuhan Maya Beach Water Park.

VIDEO: ?? Crowds packed out a water park over the weekend in the central Chinese city of #Wuhan, where the #coronavirus first emerged late last year, keen to party as the city edges back to normal life pic.twitter.com/SJFBmx5sU8

Though local media say the park officially operates at 50 percent capacity, “none of the tightly-packed partygoers were seen to be wearing face masks,” the French news agency reported.

AFP added the official explanation that “there have been no new domestically transmitted cases officially reported in Hubei province” since mid-May, and that the 76-day lockdown had been lifted in April.

Thousands of Chinese ignored the coronavirus and participated last weekend in a techno music macro party at a water park in Wuhan, where Coronavirus disease emerged at the end of 2019, which generated controversy this Monday on social networks. pic.twitter.com/tJKPQq8knW

While nearby countries such as South Korea and Japan managed to keep track of the people infected and suppressed the epidemic without a lockdown, almost every other country in the world has implemented the Wuhan model to some extent or another – and got nowhere near the same result.

The US has now been locked down to some extent or another for twice as long as Wuhan – 154 days as of Monday – though it was originally supposed to be only “15 days to slow the spread.” As a result, the economy has ground to a halt, small businesses have been ruined, and millions are facing eviction for being unable to afford rent. European countries are having similar problems.

Moreover, the flip-flop on masks by their governments – going from ‘don’t wear them, they don’t work’ in March to ‘everyone must wear them on penalty of fines’ by July – has angered the public, already frustrated by the neverending lockdowns and the attendant economic ruin.

Admissions by top scientific advisers – such as Dr. Anthony Fauci in the US – that the original rhetoric on masks was not driven by science, but by a desire to prevent hoarding by the general public, have not helped win the public trust. Neither has the behavior of Professor Neil Ferguson, the UK author of the lockdown model, who was caught violating quarantine to be with his mistress, back in May. Yet officials continue to insist that lockdowns work, need to continue indefinitely, and things would have been far worse without them.

We cannot stop with our social distancing.

We cannot be going to house parties or standing among maskless crowds outside a bar.

We have to stick with the things we’ve been doing – things that are saving lives.

Critics who put forward data that show otherwise – pointing to examples like the Hawaii islands or Peru, where the virus has rampaged despite the strict lockdowns – are either derided or censored by major social media platforms for spreading “misinformation.”

Peru had one of the earliest (March 16th) and longest (four months) lockdowns.

But it has the highest daily deaths per capita in the world now.

Lockdowns don't work. How many additional refutations do we need for people to stop suggesting the use of lockdowns? pic.twitter.com/5xZehDtNAB

If anything, lockdown advocates say they haven’t been harsh enough, and point to China’s 89,000 or so official cases of Covid-19 and about 4,700 fatalities, in comparison with 5.4 million and 170,000 deaths in the US so far.

US President Donald Trump has rejected the official Chinese figures as fraudulent, even as he has defended his administration’s approach to leave the lockdowns and their severity up to state governors. The fact it’s an election year in the US and everything – including the pandemic – has become viciously politicized doesn’t help.

The Wuhan pool party has now become a Rorschach inkblot test, with both sides of the debate seeing it as proof of their position. The one thing everyone will agree on is that the Chinese don’t seem to be too concerned about Covid-19 anymore.

Source: Wuhan pool party shows China is over the Covid-19 lockdowns; the rest of the world, not so much — RT Op-ed