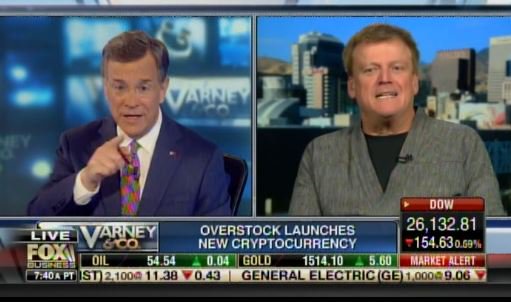 Byrne fire off a warning shot meant for the deep state…

Patrick Byrne: I ended up in the center of the Russian and the Clinton investigations. I have all the answers. I have been sitting on them waiting for America to get there. Last summer I figured out… what they all are is all about political espionage. It had nothing to do with law enforcement, it was all political espionage. Here’s the bottom line. There is a deep state like a submarine working just beneath the waves of the periscope depth watching our shipping lane. And a nuclear ice breaker called the USS Bill Barr has snuck up on them and is about to ram midship.

That’s about to happen and I think we’re about to see the biggest scandal in American history as a result. But it was all political. Everything you think you know about Russia and Clinton investigations is a lie. It’s all a cover-up. It was all political espionage.

David Asman: You think Bill Barr is going to get to the bottom of it.

Patrick Byrne: I think he has gotten to the bottom of it.

Via Varney and Co.: