Working in top secret over a period of 17 years, Russian and American scientists collaborated to remove hundreds of pounds of plutonium and highly enriched uranium — enough to construct at least a dozen nuclear weapons — from a remote Soviet-era nuclear test site in Kazakhstan that had been overrun by impoverished metal scavengers, according to a report released last week by the Belfer Center for Science and International Affairs at Harvard. 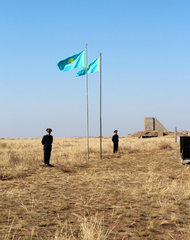 Soldiers near the center of the former Soviet nuclear test site in Semipalatinsk, Kazakhstan.

The report sheds light on a mysterious $150 million cleanup operation paid for in large part by the United States, whose nuclear scientists feared that terrorists would discover the fissile material and use it to build a dirty bomb.

Over the years, hints emerged that something extraordinarily dangerous had been left behind in a warren of underground tunnels — like the American aerial drones that circled over the site, looking for intruders, or the steel-reinforced concrete that was poured into tunnels and over stretches of earth.

Among the report’s new revelations is that the Soviet testers left behind components, including high-purity plutonium, that could have been used to build not just a dirty bomb but a “relatively sophisticated nuclear device,” an American official told the report’s authors.

American scientists spent years trying to coax information about Soviet-era testing from their counterparts in Russia.