Update: the women who was partially sucked out of the Southwest Airlines Boeing 737 has died, according to the NTSB Chairman Robert Sumwalt, sending the stock of LUV sliding:

According to Sumwalt’s press conference, an NTSB go team is sending specialists with expertise in power plants, air worthiness, survival factors and operations to begin an immediate investigation. At that point the engine will be shipped offsite to do detailed “teardown” examination.

A woman was partially sucked out of a Dallas-bound Southwest Airlines flight after a piece of the jet’s engine flew into and broke a window, according to the father of a passenger, who told NBC10 of the incident.

The Boeing 737 was then forced to make an emergency landing at Philadelphia’s airport Tuesday with part of the covering from its left engine ripped off and a window damaged. Neither the airline nor the Federal Aviation Administration explained what went wrong. 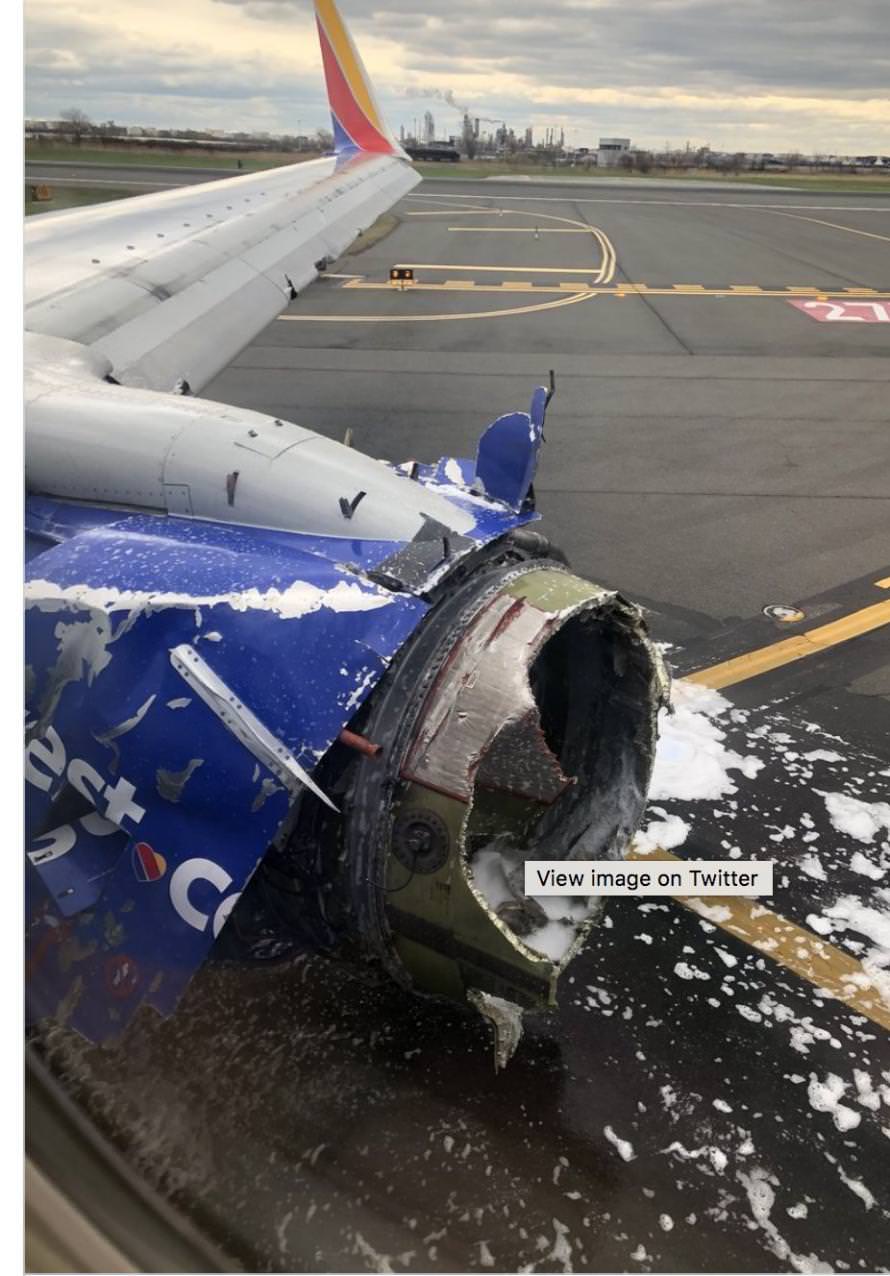 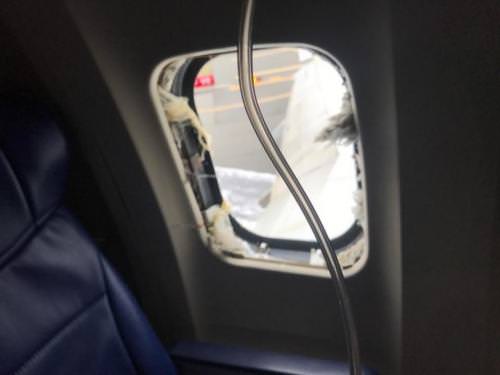 Southwest said there were 143 passengers and five crew members onboard the Boeing 737, which was headed from New York’s LaGuardia Airport to Dallas’ Love Field. Passengers were seen walking off the plane onto the tarmac at the airport after landing around 11:20 a.m. 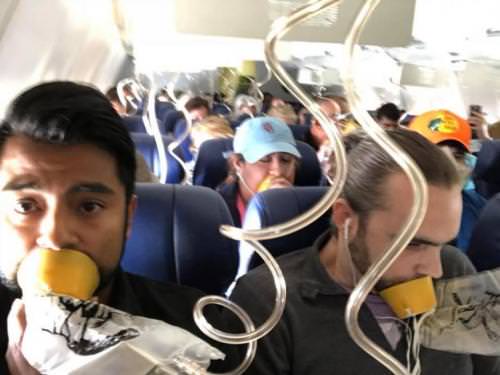 “One passenger, a woman, was partially … was drawn out towards the out of the plane … was pulled back in by other passengers,” he said in a phone interview with NBC10. The woman is said to have been rushed to a Philadelphia hospital.

Southwest plane from LaGuardia to Dallas was diverted in Philadelphia. The engine blew out in flight. (Picture from @joeasaprap) pic.twitter.com/NUv3PrcvLg

Flight 1380 made an emergency landing at Philadelphia International Airport at around 11:00 a.m. Tuesday after taking off from LaGuardia Airport in New York City. A large amount of fluid, possibly jet fuel, could be seen under and trailing behind the left side of the plane.

Firefighters could be seen outside a Southwest Airlines plane on the airport tarmac. Some passengers were led off with crutches by firefighters.

Passengers shared photos of an engine with major damage. The engine inlet appears to be shredded with metal bent outward.

One terrified passenger posted a live video to his Facebook page during the ordeal. The grainy footage shows a man attempting to secure his yellow oxygen mask while updating loved ones following his feed. –NBC

“Something is wrong with our plane! It appears we are going down! Emergency landing!! Southwest flight from NYC to Dallas!!” Facebook user Marty Martinez wrote. He then added, “We are bracing for landing!!”

Martinez told CBSN that he thought he was recording his “last moments.” After the plane landed, he posted photos of a damaged window

.@SouthwestAir flight #1380 update: Flight from LGA to Dallas Love Field landed safely at PHL and passengers are being brought into the terminal. Flights are departing and arriving but passengers should expect delays. Check flight status with your airline.

UPDATE PHL 1:45 PM: FAA has lifted ground stop for flights waiting on the ground at other airports to depart for PHL. Planes are departing from PHL. Passengers should expect delays. Check flight status with your airline.

News helicopter footage showed damage to the left engine and the tarmac covered with firefighting foam, although there were no signs of flames or smoke. Tracking data from FlightAware.com shows the flight was heading west over New York’s southern tier when it abruptly turned toward Philadelphia, according to CBS.

Southwest has about 700 planes, all of them 737s, including more than 500 737-700s like the one involved in Tuesday’s emergency landing. It is the world’s largest operator of the 737. The Boeing 737 is the best-selling jetliner in the world and has a good safety record.

Investigators are likely to take apart the failed engine from Tuesday’s plane and examine maintenance records as they try to piece together the cause of the explosion. The flight was powered by CFM engines. An official told CBS News that CFM has sent representatives to the scene to support the investigation.

The engine failure was reminiscent of a similar event on a Southwest Boeing 737-700 jet in August 2016 as it flew from New Orleans to Orlando, Florida.  Shrapnel from the engine left a 5-by-16-inch hole just above the wing. Passenger oxygen masks dropped from the ceiling. Pilots landed the plane safely in Pensacola, Florida.

Investigators with the National Transportation Safety Board said one of the engine’s fan blades broke off from the hub during the flight. The broken edge of the blade showed crack lines consistent with metal fatigue.

The NTSB was sending a go-team to the airport in Philadelphia to investigate and planned a 3 p.m. news conference.