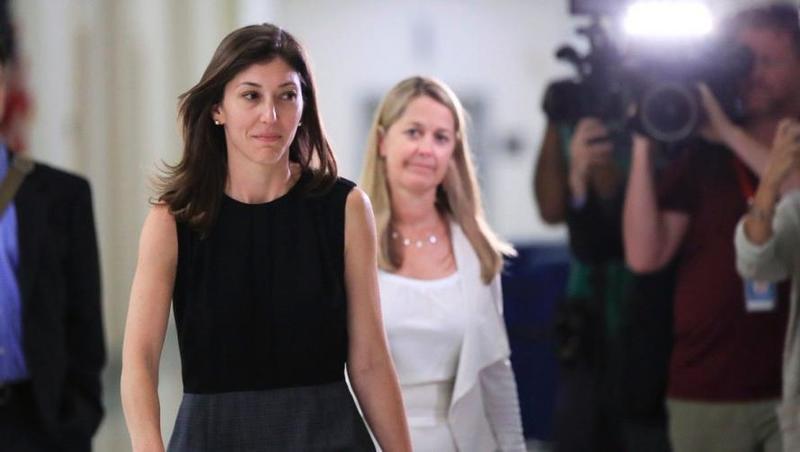 “Why were the lovers text messages scrubbed…”

Update: President Trump has responded to the article, tweeting “When Lisa Page, the lover of Peter Strzok, talks about being “crushed”, and how innocent she is, ask her to read Peter’s “Insurance Policy” text, to her, just in case Hillary loses,” adding “Also, why were the lovers text messages scrubbed after he left Mueller. Where are they Lisa?”

When Lisa Page, the lover of Peter Strzok, talks about being “crushed”, and how innocent she is, ask her to read Peter’s “Insurance Policy” text, to her, just in case Hillary loses. Also, why were the lovers text messages scrubbed after he left Mueller. Where are they Lisa?

With a week to go before the long-awaited DOJ Inspector General’s report on the FBI’s conduct surrounding the 2016 election, former agency lawyer Lisa Page would like everyone to know that she’s the real victim.

Speaking with the Daily Beast‘s Molly Jong-Fast, who challenged her on exactly nothing (such as whether she altered Mike Flynn’s 302 form, or what the ‘insurance policy‘ was, or if she coordinated with the Washington Post on a “media leak strategy”), Page insists that her hatred of Trump never influenced her work investigating him, and that while she prefers to live in obscurity – she was compelled to tell her side of the story after President Trump mocked her with a fake orgasm routine at a rally last month – and not because of IG Michael Horowitz’s FISA report due on December 9th.

Horowitz has circulated the report to key figures for legal review, and is rumored to clear to clear Page and other FBI officials of letting their raging hatred of Trump (and love of Clinton) color their work – hence the ‘Teen Vogue’ – tier puff piece. We’re sure she’ll go into greater detail when she writes a book on the whole ‘matter.’

“And that’s when I become the source of the president’s personal mockery and insults. Because before this moment in time, there’s not a person outside of my small legal community who knows who I am or what I do. I’m a normal public servant, just a G-15, standard-level lawyer, like every other lawyer at the Justice Department.”

Does it feel like a trauma? “It is. I wouldn’t even call it PTSD because it’s not over. It’s ongoing. It’s not a historical event that is being relived. It just keeps happening.”

“It’s almost impossible to describe” what it’s like, she told me. “It’s like being punched in the gut. My heart drops to my stomach when I realize he has tweeted about me again. The president of the United States is calling me names to the entire world. He’s demeaning me and my career. It’s sickening.”

“I’m someone who’s always in my head anyway—so now otherwise normal interactions take on a different meaning. Like, when somebody makes eye contact with me on the Metro, I kind of wince, wondering if it’s because they recognize me, or are they just scanning the train like people do? It’s immediately a question of friend or foe? Or if I’m walking down the street or shopping and there’s somebody wearing Trump gear or a MAGA hat, I’ll walk the other way or try to put some distance between us because I’m not looking for conflict. Really, what I wanted most in this world is my life back.”

“We were very deliberate and conservative about who we first opened on because we recognized how sensitive a situation it was,” Page says. “So the prospect that we were spying on the campaign or even investigating candidate Trump himself is just false. That’s not what we were doing.”

Page felt abandoned by the FBI and Justice because of the release of the messages and because the bureau issued no statement defending her and Strzok. “So things get worse,” she continues. “And of course, you know, those texts were selected for their political impact. They lack a lot of context. Many of them aren’t even about him or me. We’re not given an opportunity to provide any context. In a lot of those texts we were talking about other people like our family members or articles we had sent each other.”

At the end of the day, Page wants us to know that she’s the real victim here. Perhaps she can provide those missing 19,000 text messages for some even better context?