Dead bodies piled up in NE China in 1 night—pic.twitter.com/nx7DD2DJwN

What this leads to…

3) Doubling time in China may not be days anymore. Doubling time now possibly “hours” says some experts — let that sink in. R is hard to calculate if doubling is <1 day because it’s hard to PCR test that fast. The point is China & the Earth is in deep trouble.

4) The deaths in mainland China is being hugely underreported outside of China. Through a survey of hospitals, funeral parlors & related funeral industry chains in Beijing—there is a recent explosion in funeral services caused by the sharp increase in deaths.

5) Example—cremation in Beijing nonstop. Morgues are overloaded. Refrigerated containers needed. 24/7 funerals. 2000 bodies backlogged for cremations. Sound familiar? It is spring 2020 all over again— but this time for China, emulating more Western-mass infection approach.

7) Yes I care because I was born in China — but also because I’m an epidemiologist (my D degree is in it), & I’ve seen this shit show before. What happens in China doesn’t stay in China Wuhan was our lesson 3 years ago. The global fallout of this 2022-2023 wave will not be small.

8) I’m going to pause for a moment—am I saying this will be the start of another “Thermonuclear bad” #COVID wave worldwide? Not necessarily via virus directly— but the global economic fallout from China’s new mega tsunami wave will be ugly. You can ignore my words at own peril.

9) 1-2 million deaths in China is a very common number lately—I’ve seen the models— it’s certainly possible. It could be higher if govt doesn’t do anything, lower if govt curbs virus with heavy mitigations again.But anti-China-zero-COVID folks should accept their hand in this.

10) We need more collective empathy in this world. Just because something happens in a faraway city somewhere that you’ve never heard of—doesn’t mean it won’t affect you. Chances are— in this world—it will affect you. And it may affect / harm our children… may they forgive us.

11) Schools are closed in Shanghai for the next month, and in many other outbreak cities. This comes just weeks after restrictions on COVID were lifted. Protecting kids is also protecting their parents / caretakers and preventing them from being orphaned by a pandemic.

12) so what is going on with China’s vaccination situation? There is a lot of vaccine resistance in the elderly. Additionally, the newer #Omicron sub variants, 2 shots not enough – and 3 shots of China’s main CoronaVac may not be enough again for bad evasive new variants. 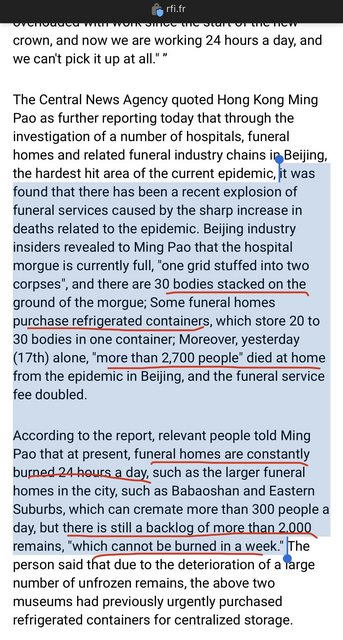 6) Westerns think there is a fever and antibiotic shortage now? ➡️Wait until China’s production is diverted from exports! Here—people rushed to a pharmaceutical factory to buy ibuprofen because it is completely sold out elsewhere! Dec 18, in #Zhuhai City. pic.twitter.com/hvV5Nnqh7m

“They can’t feed their own population

Someone in CCP made a calculation. In order for those deemed worthy to survive with food in the next 5 years, many must die now…”

15) This is real—In case you need video proof of the cremations—Staff at Beijing's largest Babaoshan funeral house confirmed that all of its incinerators were working but were still unable to meet demand, resulting in a 20-day backlog…

16) BBC’s China reporter @StephenMcDonell tells me… “In Beijing Covid has gone crazy, must be millions infected really quickly. I’m sure other cities will be next.”

Watch this BBC report — “China is overloaded and in for a rough few months”…pic.twitter.com/AgU5NazFRn

WHAT? | THERMONUCLEAR BAD 10% of Earth’s population likely infected over next 90 days.

House Republicans Warn: Subpoenas Will Fly To The FBI Over ‘Twitter Files’