The United States has no military allies in its plan to launch missile attacks against Syria as punishment for the country’s use of chemical weapons, White House Chief of Staff Denis McDonough said Sunday.

McDonough conceded the fact on CNN’s “State of the Union” after persistent questioning from host Candy Crowley, who asked him whether President Barack Obama has secured international military support for the strike — as opposed to moral support. ”Not at this point,” he said. “But it is specific support for holding him [Syrian President Bashar Assad] to account, and it is a recognition that it happened. We feel very good about the support we have, and we’ll continue to build more.” McDonough said Obama, Congress and the rest of the world no longer doubt the fact Assad carried out such horrific crimes against his people. ”Nobody now debates the intelligence, which makes clear … that in August, the Assad regime used chemical weapons against its own people,” he said. “The entire world believes that. Congress has the opportunity this week to answer a simple question: Should there be consequences for him for having used that material.” Obama, who will address the country Sept. 10 on the topic, has called for a targeted, limited, consequential-action campaign to deter Assad and degrade his capabilities for another chemical-weapons attack, McDonough said. ”This is not Iraq or Afghanistan,” he said. “This is not Libya. This is not an extended air campaign.” On NBC’s “Meet the Press,” McDonough said stopping the Syrian government from moving chemical weapons out of hiding and onto the front lines is the goal of Obama’s intended missile strikes. 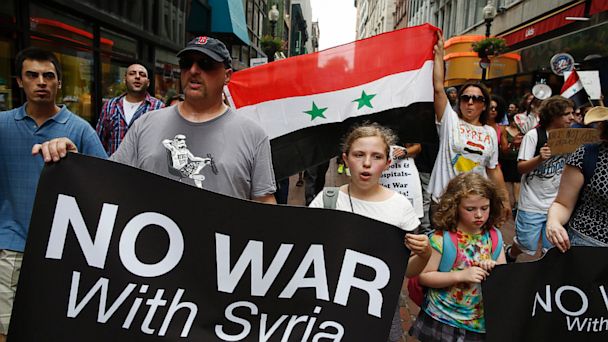 If chemical weapons are moved to the front lines, it means a greater risk of them being proliferated, McDonough said. ”I hope that every member of Congress, before he or she decides how they’ll cast their vote, will look at those pictures,” McDonough said, referring to the video of an Aug. 21 attack showing adults and children suffering from the effects of sarin gas. The video also shows the bodies of dead children lined up across a room. Although public sentiment and that of Congress is largely against U.S. military action, McDonough said that no one who has seen the intelligence on the attack doubts it. ”That means that everybody believes that Bashar al-Assad used chemical weapons against his own people … killing nearly 1,500 on Aug. 21,” McDonough said. “So the question for Congress this week is what are the consequences for his having done so?” Congress’ answer will be listened to not only in Syria, McDonough said, but also in Iran and the terrorist group Hezbollah. Iran, which is working on a nuclear weapons program, must be told that it does not have greater freedom to act, he said. ”They do not have greater operating space to pursue a nuclear weapon which would destabilize that entire region, threaten our friends and allies and ultimately threaten us.” Newsmax