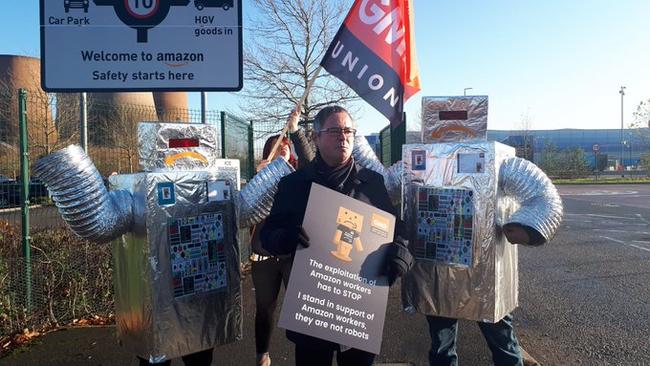 “The conditions our members work under at various Amazon sites across the UK are appalling.”

Thousands of Amazon workers across Europe have walked out as part of a coordinated Black Friday strike against working conditions at the world’s largest online retailer.

Both employees and non-employee union members in the UK, Germany, France and Spain came out in droves, displaying banners in various languages – such as the GMB union’s “WE ARE NOT ROBOTS” signs seen at various locations.

“The conditions our members work under at various Amazon sites across the UK are appalling,” GMB national officer Mick Rix told Business Insider.  “Workers are breaking bones, being knocked unconscious and being taken away in ambulances.”

“Amazon workers want Jeff Bezos to know they are people – not robots. It’s about time Mr Bezos showed empathy with the very people that have helped build his vast empire and make sure it is not a Black Friday for Amazon workers,” Rix added.

A freezing dawn on #BlackFriday outside the Rugeley @amazon depot with the @GMB standing up for the rights of @amazon workers. One young man with his child nearly in tears just sacked. A 21st century company! More like a 19th century millowner. Shame on you, @JeffBezos pic.twitter.com/751vK7YFNY

Proud to stand with Amazon workers at Rugeley today with @GMBWestMidlands. We Are Not Robots! pic.twitter.com/LfYFVxLzxo

On Wednesday we highlighted a recent report which concluded that Amazon warehouse workers are seriously injured on the job at twice the rate of other warehouse workers – likely a factor of the company’s demanding conditions.

Injury records were compared from 23 of Amazon’s 110 fulfillment centers nationwide, which revealed that the rate of injuries at Amazon’s centers was 9.6 per 100 full-time workers in 2018, compared with an industry average of four, according to the Atlantic.

More protests are planned for Cyber Monday, while demonstrations outside of three German warehouses are planned to last until Tuesday at the soonest.

A tweet from a regional arm of Germany’s ver.di worker’s union said: “Stick to your guns!”

A spokesman for ver.di said there were more than 2,200 strikers across six locations in Germany. –Business Insider

In Spain, Amazon worker Julian Marval said “There’s no signs of Amazon wanting to engage in negotiations,” regarding working conditions. Marval has worked for the company seven years and says that things have dramatically worsened since April of last year.

“You’re all over the place from the amount of orders that come in… on average you can cover eight to 20 miles a day.”

Amazon responded to the protests by claiming they offer “industry-leading pay” along with benefits and a ‘safe work environment.’