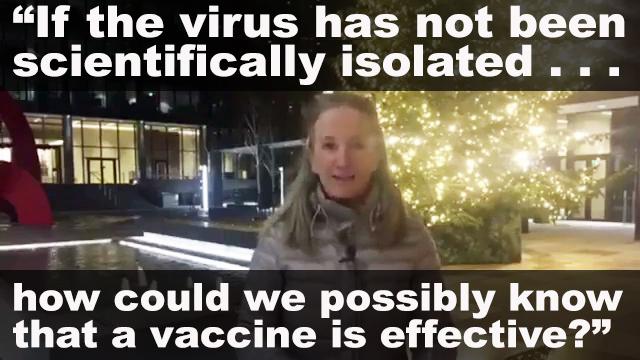 “AS PART OF OUR LEGAL ACTION we had been demanding the evidence that this virus actually exists [as well as] evidence that lockdowns actually have any impact on the spread of viruses; that face-masks are safe, and do deter the spread of viruses – They don’t. No such studies exist; that social distancing is based in science – It isn’t. it’s made up; that contact tracing has any bearing on the spread of a virus – of course it doesn’t. This organisation here – is making it up as they go along.” – Gemma O’Doherty

The only “evidence” is a two-page Chinese report in which they took sputum samples of TWO individuals with pneumonia, underwent all the motions of viral isolation and assumed the result “had to be a virus” and the virus “had to be the cause”. No microscopic imaging evidence, no testing of Koch’s postulates.

Then they extracted around 30,000 short sequences “assumed to be from the virus” and used a program to align them into a genome. Since the possible alignments are trillions, the program just tried tried to aligned them to produced a “guess” genome that was most similar to a library of known viruses. Had they used a library of bird genomes, the cause of the “new disease” would have deemed to be a new feathered species

Source: TODAY THEY WERE FORCED TO ADMIT THAT ‘COVID-19’ DOES NOT EXIST