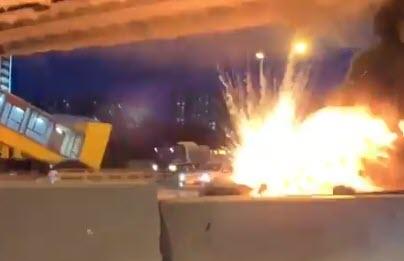 …initial reports are blaming the car’s Autopilot system for failing to recognize a stopped tow truck that was attending to a vehicle on the road.

Just days after we reported that Tesla could be on the verge of a formal investigation by the NHTSA, a father and his two kids in Moscow both suffered serious injuries after their Tesla Model S on Autopilot slammed into a tow truck before bursting into flames, according to RT.

Shocking video footage from a vehicle passing the accident in the opposing lane captures the moment that the Tesla explodes, going up in flames and “shocking oncoming drivers”.

This video, around the 2 minute mark, shows a driver passing what can only be described as the smoldering wreckage of the Tesla after the finally was finally under control.

The accident took place on Moscow’s Ring Road on Saturday evening and initial reports are blaming the car’s Autopilot system for failing to recognize a stopped tow truck that was attending to a vehicle on the road.

Both the driver and his children were rushed to the hospital before the Tesla caught fire. The driver suffered a concussion and a leg fracture and the children suffered cervical spine and chest injuries.

Video of the initial incident shows the Tesla, in the left hand lane, failing to move over for a stopped tow truck and driving directly into the stopped vehicle.

With more Teslas on the road now than ever, it feels as though the “watershed” moment that’ll prompt the NHTSA to take serious and swift action against the company, in order to protect drivers, might not be that far away.