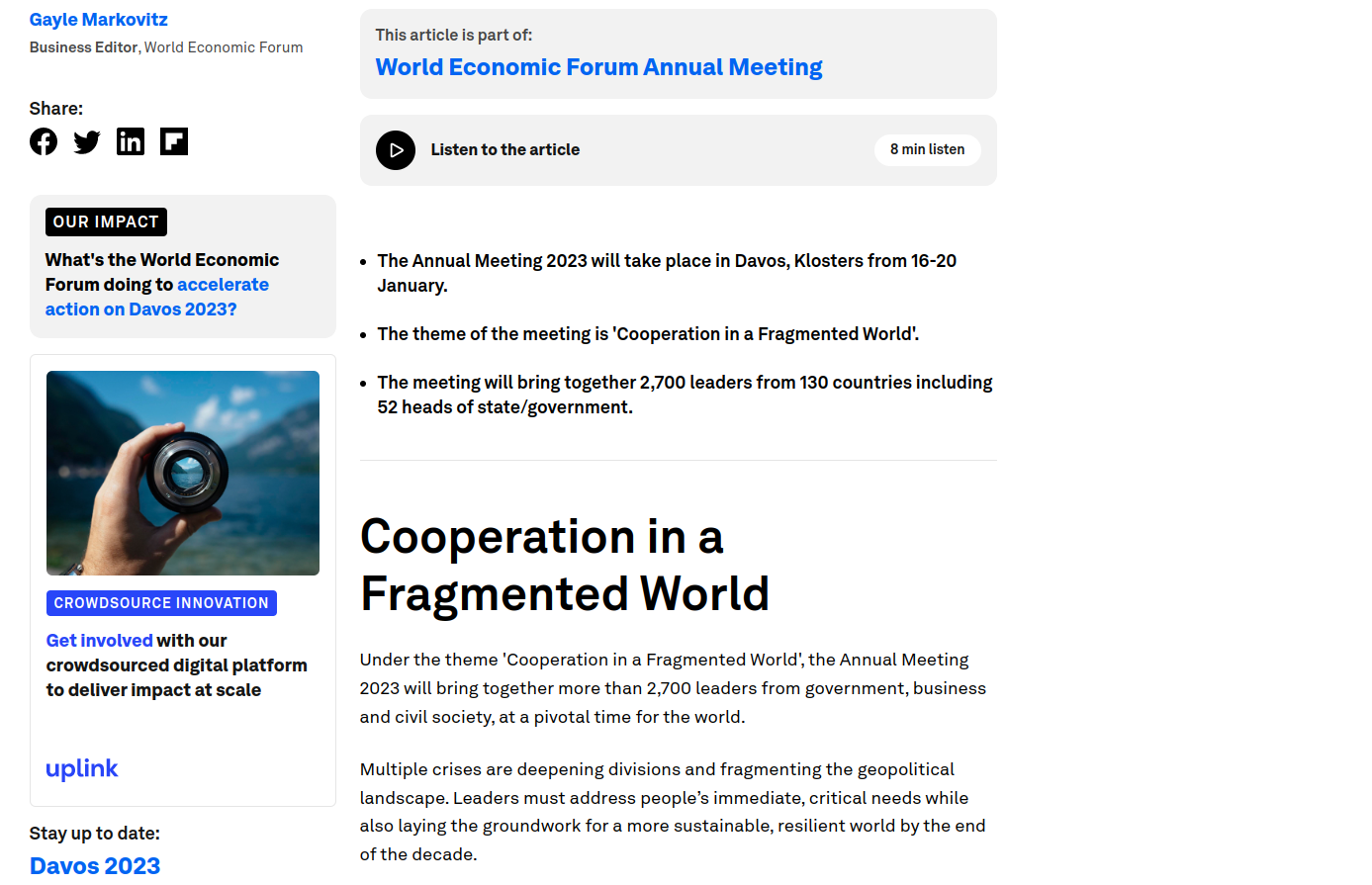 WATCH OUT! They are gathering again this month 2023! 52 heads of state and many hundreds of Klaus Schwab At 2022 WEF: “The Future Is Built By Us, By A Powerful Community As You Here In This Room” January 15-21, 2023 What will these Elites and Selected Officers of gov. be planning for humanity?

This year will bring about the highest ever business participation at Davos, with over 1,500 leaders registered across 700 organizations, including over 600 of the world’s top CEOs form the World Economic Forum’s Members and Partners, with top-level representation from sectors such as financial services, energy, materials and infrastructure, information and communication technologies. They come as governments increasingly look to business to take big ideas and put them into action quickly and inclusively. There will also be a strong representation of Global Innovators who are transforming industries, with more than 90 mission-driven leaders from the Forum’s Technology Pioneers and recently launched Unicorn communities.

Leaders from civil society taking part in the meeting include:

Among the new initiatives at the Annual Meeting is the Global Collaboration Village, a purpose-driven metaverse that fosters more sustainable public-private collaboration and spurs action to deliver impact at scale. The first-ever metaverse multilateral meeting hosted by the Forum will bring together experts and leaders from finance, food and retail to drive action on ocean health and seafood waste.

This year more than 160 of the Forum’s civic-minded young leaders will join as members of our Global Shapers, Young Global Leaders and Social Entrepreneurs communities. We will also welcome nine Indigenous leaders bringing the knowledge and expertise of their communities to advance regional and global efforts in ecosystem restoration, inclusive trade and sustainable development.

More than 125 experts and heads of the world’s leading universities, research institutions, and think tanks will join the Meeting, bringing the latest facts, insights, science, and data into the programme and the Forum’s work.

The Arts and Culture programme features a number of sessions and immersive art installations on the preservation of coral reefs, displaced peoples and the global refugee crisis, gender equality and female empowerment, and global sea-level rise. It will include the 27th Annual Crystal Awards and our Cultural Leaders.

This year is the 20th anniversary of the Open Forum, which welcomes diverse people from around the world to listen and share experiences with experts and leaders on pressing issues. The theme is, Our Environment: Lessons, Challenges and Opportunities. For more information, click here.

The 53rd Annual Meeting will also be climate-neutral for the sixth consecutive year. New initiatives to boost resource efficiency and reduce emissions will build on the Forum’s 2018 ISO 20121 certification for sustainable event management. Learn more about our strategy and efforts here.