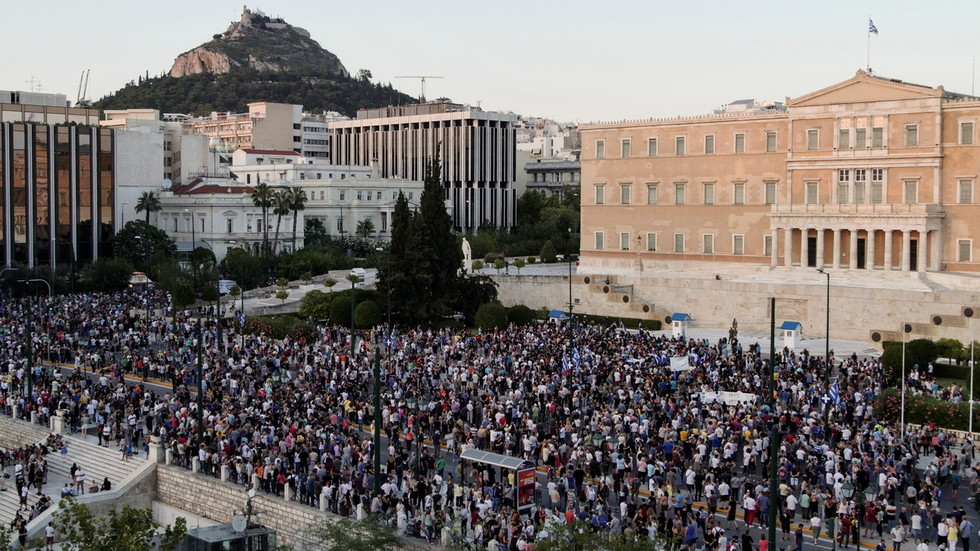 Thousands took to the streets in two of Greece’s largest cities to protest new health mandates, which bar the unvaccinated from many public spaces and require medical staff to take the shot, as well as plans to immunize teenagers.

Thousands took to the streets in two of Greece’s largest cities to protest new health mandates, which bar the unvaccinated from many public spaces and require medical staff to take the shot, as well as plans to immunize teenagers.

Large crowds of demonstrators were seen in Athens and Thessaloniki on Wednesday, numbered in the thousands according to the Associated Press, some reportedly chanting “Hands off our kids!” while others hoisted banners reading “We say no to vaccine poison.”

The protests come on the heels of several new pandemic measures, one of which effectively closes all indoor public places to the unvaccinated, including bars, restaurants, theaters and other entertainment venues. The policy takes effect on Friday and will remain at least until the end of August, part of an effort to curb transmission at crowded bars and clubs, which the government has blamed for a recent surge in cases.

“After a year and a half, no one can claim ignorance about the coronavirus anymore,” Prime Minister Kyriakos Mitsotakis said earlier this week. “The country will not shut down again due to attitudes adopted by certain people… It’s not Greece that’s a danger, but unvaccinated Greeks.”

We stand with our brothers in Greece who are against compulsory vaccines and Vaccine passports.
Are you waking up people to what is happening.
You wont see this on the news.

Massive protests all over Greece today after the prime minister issued what is essentially medical apartheid. The media is trying to spin it as an “anti vaccine” protest instead of what it’s really about : freedom of choice and bodily autonomy. https://t.co/tR2SoRlOc6

Nursing home staff will also be required to be vaccinated starting on August 16, facing suspension without pay if they fail to get the shot. A similar rule will come into force in September for workers at all public and private hospitals. Clinics that flout the new restriction could be slapped with a €50,000 fine.

In another controversial move set to begin on Thursday, the government will also allow teens as young as 15 to receive the coronavirus vaccine with the consent of a parent or guardian.

Despite their size and energy, Wednesday’s protests appeared to remain peaceful. While helmeted riot police were seen in some images, the law enforcement presence was not apparent in much of the footage circulating online. No clashes were reported.

Protests all over Greece 14th July against mandatory vaccinations ans new regulations in the F&B and entertainment industry.. this is Thessaloniki .. pic.twitter.com/G7RYzgiNGj

Similar mass demonstrations were also seen in France on Wednesday, where crowds took to the streets across the country to mark Bastille Day and protest a new vaccine requirement for healthcare workers. A “health pass” set to be introduced in August has also stoked outrage, after President Emmanuel Macron previously vowed to issue no vaccine mandates or passports.

The French protests, in contrast to those in Greece, saw clashes with police, while some demonstrators set fires, vandalized buildings and erected makeshift barricades in the streets.