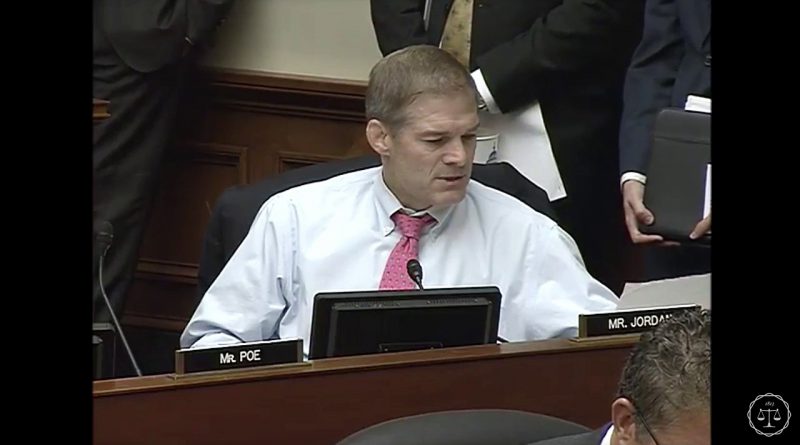 Rep. Jim Jordan from Ohio loses his patience with Assistant FBI Director Herring regarding the Clinton Email Scandal. Walks through the entire reason why Hillary Clinton was treated differently than any other suspect.

*I will immediately reply to any legitimate copyright concerns should one exist.*

*DOD Non-Endorsement Disclaimer: “The appearance of U.S. Department of Defense (DoD) visual information does not imply or constitute DoD endorsement.”*

*Department of Defense (DoD) motion and still media files are referred to as Visual Information (VI)*; in general, DoD VI that are works of authorship prepared by U.S. Government employees as part of their official duties are not eligible for copyright protection in the United States.

*Fair Use Disclaimer for News Broadcasting*: The Content in this video constitutes a ‘fair use’ of any such copyrighted material as provided for in section 107 of the US Copyright Law. In accordance with Title 17 U.S.C. Section 107, the material on this site is distributed without profit to those who have expressed a prior interest in receiving the included information for research and educational purposes. This channel is making such material available in a effort to advance the understanding of the following, including but not limited to: environmental, political, human rights, economic, democracy, scientific, and social justice issues.

*NOTHING IN THIS VIDEO OR ANY VIDEO ON THIS CHANNEL SHOULD EVER BE CONSTRUED BY ANYONE THAT THIS CHANNEL CONDONES UNLAWFUL ACTS OR VIOLENCE*. All grievances, should be settled in a humane, legal and ethical manner. Comments that are of a nature that construes “Hate Speech” or other violence will likely be automatically censored, and comments banned.