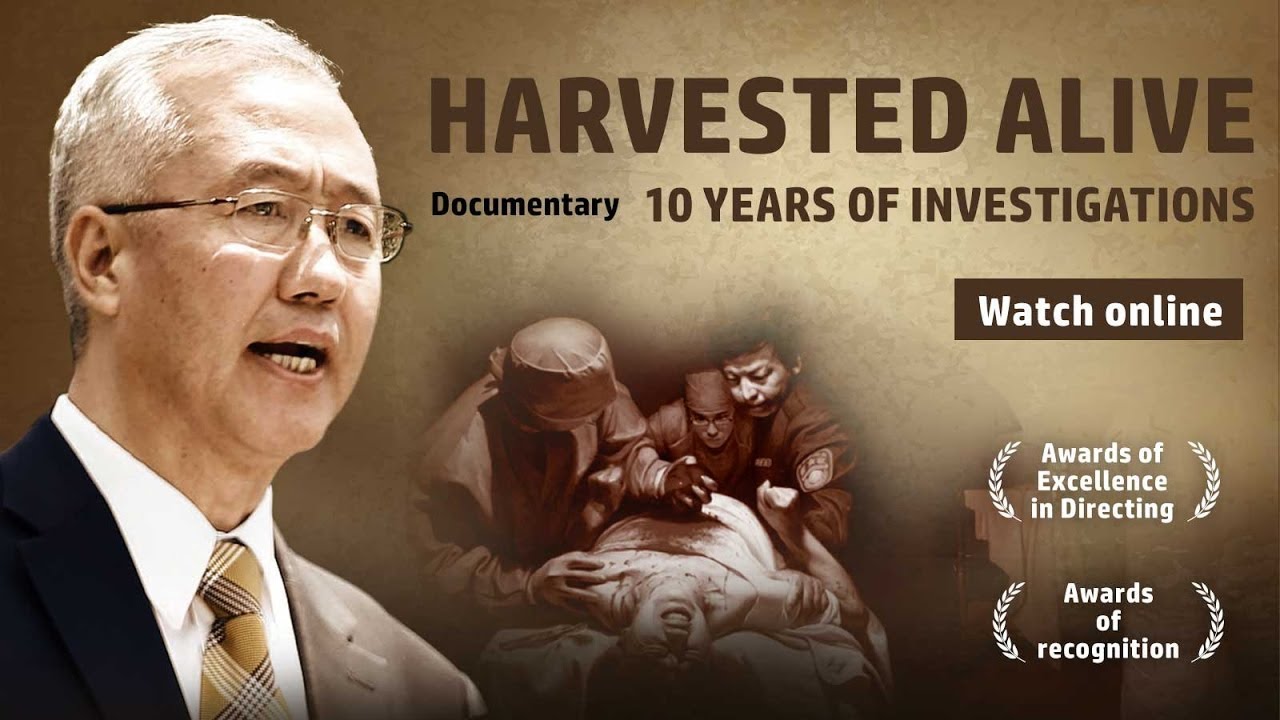 Harvested Alive -Ten year’s investigate of force organ harvesting As a doctor, Zhiyuan Wang spent 30 years studying how to save lives. He never imagined that he would spend another 10 years investigating how doctors killing innocent lives……

– A former Chinese aviation military doctor narrated his 10-year investigation and findings and showed people the complete set of the core investigative results, which would shock the entire world.

The latest documentary film “Harvested Alive – Ten Years of Investigation” presents the phone investigative recordings of five incumbent and former standing committee members of the Chinese Communist Party Central Politburo, a vice chairman of the Central Military Commission, a defense minister, a former health minister of the General Logistics Department of the People’s Liberation Army, as well as many court officials, officials of the Politics and Law Committee and “610 Office” officials. It also presents the recording of the testimony of an armed policeman, who was guarding the site of the organ harvesting of a Falun Gong practitioner, the phone investigation recordings of the organ transplant surgeons from over 30 hospitals admitting to the use of Falun Gong practitioners’ organs, as well as the Communist Party’s media reports, the organ transplant data of 891 Chinese hospitals over the past multiple years, and other evidence.

It exposes the evilness and catastrophe, which had previously never existed on this planet. And this disaster has now been extended to more innocent people.

“I am a doctor, and I’ve spent 30 years helping and saving patients. I never thought that I would spend 10 years of my life investigating how doctors killed innocent human beings…”#WATCH ~ “Harvested Alive” – A 10 Year Investigation of Force Human Organ Harvesting via @YouTube

“As a doctor, Zhiyuan Wang spent 30 years studying how to save lives. He never imagined that he would spend another 10 years investigating how Chinese doctors take innocent lives.

95% of his evidence comes directly from China. His sources are Chinese doctors, judges, legislators, military officials, government officials, the media, and hospital websites. His research reveals an inconceivable truth – China’s hospitals, judiciary, and military worked together under the authority of the previous Chinese president Jiang Zemin to mercilessly slaughter a large number of Falun Gong practitioners through the harvesting of their organs.

Today in a time of peace, it is difficult for people to believe that such a large-scale massacre has been silently taking place in China. But the truth shows that this frenzied killing machine, driven by huge profits, is still running rampant in society.”

Words from the Producer

Produced by Deerpark Productions and award-winning director/producer Jun Li, “Harvested Alive: The Ten-Year Investigation” is a documentary that examines this unprecedented evil through the lenses and expertise of doctors and investigators. It challenges the viewer and questions whether or not the public will continue to tolerate such a heinous genocide that subverts the basic moral values of human beings.

Even a simple share
can make a big impact

Your righteous act
can save more life!

The film tells the story of a 10-year-long investigation by the World Organization to Investigate the Persecution of Falun Gong (WOIPFG) into the crimes of mass forced organ harvesting in China.

Reports by former Canadian Secretary of State (Asia-Pacific) David Kilgour, international human rights lawyer David Matas, and investigative journalist Ethan Gutmann, as well as by WOIPFG, have previously marshalled the evidence showing that there has been mass killing of prisoners of conscience to supply China’s transplantation industry with organs, starting soon after the Chinese regime’s persecution of Falun Gong began in July 1999.

“Harvested Alive” also presents this evidence, but it does so to make the case that the organ harvesting in China is a state-directed crime.

As director Jun Li told The Epoch Times in a previous interview, “These are not doctors acting in their individual capacity, but the entire state apparatus that is committing this heinous crime.”

Organized by the university chapter of Amnesty International, the showing of the award-winning film—which in January won Hollywood International Independent Documentary awards in the categories of director and foreign documentary feature—had created some buzz on campus.

The registration was full two days prior to the event, and as a result, many people inquired if they could still attend as unregistered guests. Many viewers showed up early to get their seats, and a handful could not be admitted after all the seats were filled.

The full house of 180 was moved by the film, as evidenced by the discussion that followed, with remarks by College Station Mayor Karl P. Mooney setting the tone.

“Some of you have parents, friends, grandparents who might need a transplant, and you can discourage them from going to China, from utilizing this particular source,” Mooney said. “That’s one step. Take the knowledge that you gained tonight, establish a purpose for your life, and strive to be significant!”

Mooney broadened his talk from what the audience members could do in response to the film, to what the United States could do.

“The U.S. has taken one step with H.Res.343, back in June of 2016,” Mooney said. That House resolution expresses “concern regarding persistent and credible reports of systematic, state-sanctioned organ harvesting from non-consenting prisoners of conscience in the People’s Republic of China, including from large numbers of Falun Gong practitioners and members of other religious and ethnic minority groups.”

Mooney said he hoped the Senate would now pass a similar resolution.

“I hope that President Trump will look at it particularly once the Senate comes up with the resolution,” Mooney said, “and decide [on] the appropriate avenue of communication to China.

In the audience were over a dozen members of the Corps of Cadets, a uniformed, student military organization at Texas A&M.

“The film is extremely eye-opening,” said cadet David Campbell. “It breaks my heart to see something so awful is happening in the world, and it makes me want to continue my academics so I can make a positive change in the future.”

Cadet Robert Riegert said: “This film motivates me to protect my family and the families that can’t protect themselves. So as a cadet, that’s what I come away with tonight.”

Campbell agreed with one of Mooney’s suggestions, discouraging others from going to China for transplants. “I have family members who are going through surgeries,” Campbell said. “The very first thing I was thinking as the documentary was ending is that when I get out of here, I will immediately tell them, ‘Don’t go to China to get these procedures.’”

Riegert wants to spread the word about what he learned from the film. “We will do as much as we can to get the word out. It shouldn’t be happening. We will do what we can to help stop it,” he said.

Faviana Soto, an international studies student, said: “This issue is going to reach people in Honduras because I will tell my family members and my friends and share the documentary with them. This is a very good start to exposing this issue.”

The documentary is free to download from the film’s website, HarvestedAlive.com, and so can easily be shared.

Many of the audience members signed a petition urging Texas senators John Cornyn and Ted Cruz to co-sponsor the resolution S.Res.220.

That resolution, which is being considered by the Senate during this session of Congress, expresses “solidarity with Falun Gong practitioners who have lost lives, freedoms, and rights for adhering to their beliefs and practices” and condemns “the practice of non-consenting organ harvesting.”

Stephen Gregory contributed to this report.

Mike Pence: “It was my honor as Vice President to cast the tie-breaking vote to allow states to defund Planned Parenthood. #SBC18” VIDEO