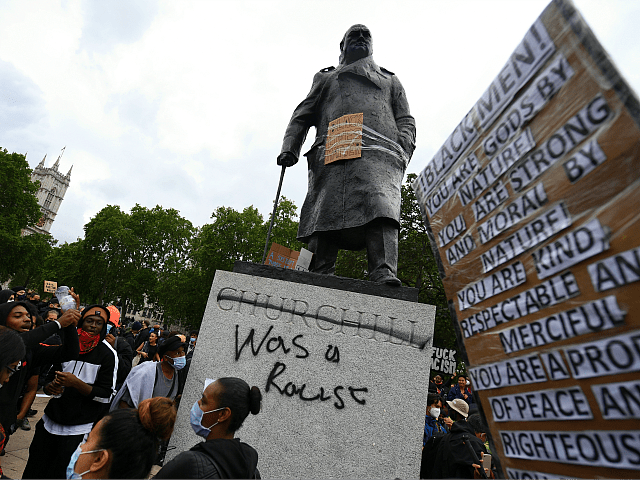 Nigel Farage condemned Black Lives Matter in the United Kingdom as a “dangerous, Marxist organisation” backed by the likes of Soros.

Nigel Farage has condemned Black Lives Matter in the United Kingdom as a “dangerous, Marxist organisation” backed by the likes of George Soros and “Hell-bent” on overturning society.

The Brexit Party leader said he was “utterly appalled” by the violence across the United Kingdom over the weekend.

“[T]he tearing down of the Edward Colston statue in Bristol… for the second day in a row, Winston Churchill’s statue in Parliament Square being defaced… a mob around the statue screaming ‘Churchill was a racist’; we saw another assault on the Cenotaph, this time with some yob climbing up there and trying to set fire with a cigarette lighter to the Union Flag — these were just some of the highlights from what happened in the United Kingdom,” he observed in the message posted to his YouTube channel.

The veteran campaigner poured scorn on the BBC for portraying the Black Lives Matter as “so peaceful and so wonderful” after multiple “violent and ugly” protests, with “over 50 Metropolitan Police officers” injured — “some of them seriously”.

“And yet, my argument here isn’t against equality of opportunity,” he explained.

“It’s not to say there aren’t still things in society that aren’t perfectly fair — but it is to say this, and to say it very, very clearly: this Black Lives Matter movement is a dangerous, Marxist organisation, hell-bent on anarchy, and we need to wake up, get some facts into our heads, and understand what it is we’re fighting.”