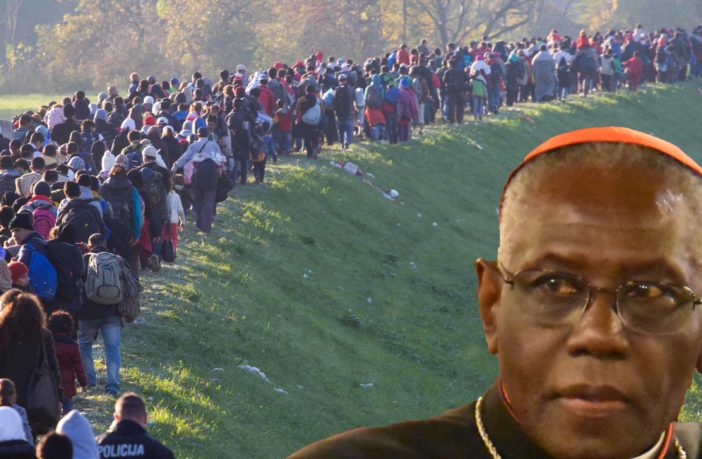 An interview fragment of African Cardinal Robert Sarah, has gone viral after it appeared on the timeline of Twitter and YouTube personality Paul Joseph Watson.

An interview fragment of African Cardinal Robert Sarah, has gone viral after it appeared on the timeline of Twitter and YouTube personality Paul Joseph Watson.

In the short footage, the Cardinal says among other things, that Europe “has lost its roots” and is invaded by other cultures that will take it over by the numbers.

According to our sources, the actual interview stems from November 2016 and is called “Why the West will die” on a French news site called “Boulevard Voltaire”.

In the interview the Cardinal was asked: We feel you worried about the Western world. What worries you?

The Cardinal explains: “You know the biggest worry is that Europe doesn’t want anymore, or has lost the sense of its origins, it has lost its roots.

“Yet a tree without roots it dies. And Im afraid west will die.

“You are invaded still by other cultures other peoples, which will progressively dominate you by their numbers and completely change your culture, your convictions, your morality.”

The Cardinal, born in Guinea and studied in France, Jerusalem and Rome, was the youngest bishop in the world at his appointment in 1979 by John Paul II at the age of 34.

In 2010 Pope Benedict XVI appointed him President of the Pontifical Council Cor Unum and created cardinal a few weeks later. He received the title of cardinal-deacon of S. Giovanni Bosco in via Tuscolana.

Cardinal Sarah is also known for his statement that “every nation has a right to distinguish between refugees and economic migrants”.

At a Europa Christi conference in Poland in 2017 he warned of the “logic” of migrant redistribution that “some people want to impose”.

World leaders cannot question the “right of every nation to distinguish between a political or religious refugee” who is forced to flee their own land, and “the economic migrant who wants to change his place of residence” without adapting to the new culture in which he lives.

He told that “Europe has since then been in an ongoing crisis caused by, among others, atheistic ideologies, and is now plunging into nihilism”.

He feels it was a mistake when the European Union decided not to revert to the continent’s Christian roots, instead building its institutions on the free market, equality of individuals and individualist human rights; because all laws should be based on the concept of human dignity, which can only come from God.

“Europe, built on faith in Christ, cut off from its Christian roots, is not in period of quiet apostasy,” the cardinal added.