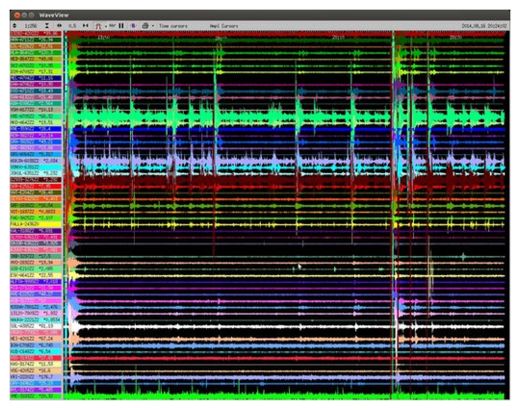 Seismic activity in Bárðarbunga volcano has increased. A seismic swarm has been ongoing since 03AM this morning, and near continuous earthquakes have been occurring since then. The depths of earthquakes in the present swarm are in the upper crust and their magnitudes are mainly around 1.5; a few earthquakes are of magnitude greater than ML3.

Long-term seismic and GPS data indicate that there is increased unrest in the northwestern region of Vatnajökull glacier, where Bárðarbunga is located:

Over the last seven years seismic activity has been gradually increasing in Bárðarbunga and the fissure swarm north of the volcano. This activity dropped down at the Grímsvötn eruption in May 2011, but soon after, the activity started to gradually increase again and has now reached similar level of activity to that just before the Grímsvötn eruption. Earlier this year, in the middle of May 2014, there was a small swarm of over 200 events and now the present swarm has already generated at least 300 earthquakes.

Since early June 2014, displacements at GPS stations around Vatnajökull (Hamarinn, Grímsfjall, Vonarskarð and Dyngjuháls) show an increased upward movement and away from Bárðarbunga.

In historic times there have been large eruptions every 250–600 years. Þjórsá Lava is the largest holocene lava flow on the earth,[1] it originated from Bárðarbunga about 8500 years ago, with a total volume of more than 21 cubic kilometers[1] with some estimates saying as high as 30 cubic kilometers, it covers approximately 950 square kilometers. The largest eruption from Bárðarbunga had a VEI of 6, many smaller-sized eruptions have been recorded in the past 10000 years.[1]

Many large prehistoric eruptions have occurred southwest of the glacier and two after settlement in Iceland, Vatnaöldur eruption about 870 and Veiðivötn eruption 1480. Both were very large eruptions that would have major effects on life in Iceland and neighboring countries were they to repeat in modern times.

Smaller eruptions are frequent northeast of Bárðarbunga in an ice-free area called Dyngjuháls. Such an eruption last occurred in 1862-4.

Studies of tephra layers have shown that a number of eruptions have occurred beneath the glacier itself, probably in the northeast of the crater or in Bárðarbunga. These eruptions appear to follow a cycle, several eruptions were in the glacier between 1701–40 and since 1780. There has been an eruption in the glacier or the system since 1864. Frequent earthquakes in Bárðarbunga indicate that the volcano will erupt sooner or later.

In September 2010, an earthquake swarm occurred near Bárðarbunga, with over 30 earthquakes recorded on 26 September, the largest quakes measuring 3.5 and 3.7 on the Richter scale.[citation needed]

In August 2014, another earthquake swarm occurred, with at least 300 earthquakes recorded on August 16, of which the largest had a magnitude of around 3.5 on the Richter scale

With indices running from 0 to 8, the VEI associated with an eruption is dependent on how much volcanic material is thrown out, to what height, and how long the eruption lasts. The scale is logarithmic from VEI 2 and up; an increase of 1 index indicates an eruption that is 10 times as powerful. As such there is a discontinuity in the definition of the VEI between indices 1 and 2. The lower border of the volume of ejecta jumps by a factor of 100 from 10,000 to 1,000,000 m3 (350,000 to 35,310,000 cu ft) while the factor is 10 between all higher indices.