Because of Japan’s unconscionable open-ended new secrecy law, it is very likely journalism in the nation has turned tail, scared of its own shadow. Nevertheless, glimmers of what has happened, of what is happening, do surface when brave people come forward.

On May 22nd 2015 Hiromichi Ugaya, a photojournalist who is well-informed, insightful, and engaging, was interviewed about what he witnessed in the aftermath of one of the world’s most horrendous disasters.

Hiromichi Ugaya was born in Kyoto City, Japan in 1963. He is an accomplished photojournalist with experience in both Japan and the United States, receiving his bachelor’s degree at Kyoto National University and his master’s degree at Columbia University.

Hiromichi first visited Fukushima within two weeks of the disaster, and he has returned nearly 50 times to photograph scenes. His is a personal mission because the tragedy does not receive adequate media coverage. According to him, very few journalists cover the aftermath; television in Japan has lost interest; the public is blasé and dangerously naïve; Japanese publishers do not entertain stories about Fukushima, and the mainstream media in Japan ignores the impact of the aftermath.

Then again, maybe The Act on the Protection of Specially Designated Secrets, Act No. 108 promulgated on December 13, 2013 is quelling public opinion?

According to a leading Japanese newspaper, the law “almost limitlessly widens the range of what can be considered confidential,” and the new secrecy law allows bureaucrats and politicians to “designate state secrets to their liking,” Nobuyuki Sugiura, Managing Editor, Tokyo Head Office, Asahi Shimbun will continue to respond to the public’s right to know, The Asahi Shimbun, December 7, 2013.

Those who leak state secrets face up to 10 years in prison.

In the face of cowardly authoritarianism, history teaches lessons of harsh reality, for example, Chernobyl is an example of the long-term tragedy associated with nuclear accidents, thirty years later, nearly one million dead (source: Alexey V. Yablokov, Center for Russian Environmental Policy, Moscow, Chernobyl: Consequences of the Catastrophe for People and the Environment, The New York Academy of Sciences, Vol. 1181, December 2009).

Chronicling the first four years of Fukushima, Hiromichi Ugaya composed a photo book about the tragedy as a personal countermeasure to widespread public apathy: Portrait of Fukushima: 2011-2015: Life After Meltdown, which is a treasure trove of over 200 unpublished photos, telling the story from the beginning to the present.

Regions of Fukushima persist ghostlike: “America Tonight journeyed to the affected areas, which are separated into zones of higher and lower radiation risk. In the hardest-hit area, known as the “exclusion zone,” the streets remain virtually empty, eerily silent and frozen in time at the moment residents fled the quaking earth and incoming sea. The garbage and debris that litter the area defy the kempt and pristine neighborhoods for which Japan is famous,” Michael Okwu, Inside Fukushima’s Ghost Towns, Aljazeera America, Jan.6, 2014.

An Insider’s Story- the interview

The government’s initial reaction to the disaster is scandalous. According to Hiromichi, the authorities should have been “more open to the public.” Because of failure to communicate the danger, unnecessary radiation exposure was widespread. Minimal information was provided and evacuations were delayed much too long.

In essence, he believes the authorities were probably concerned about public panic. Regrettably, that concern may serve to haunt and endanger lives for many years. For example: “The most serious leakage of radiation took place March 15th, which was day-five of the nuclear accident, but still, within the radius of 10-20 kilometers, many citizens were still there… They were exposed to the radiation. The number of the people who got exposed to the radiation comes up to like 230,000, which is ten times bigger than Three Mile Island of 1979. So, it’s huge and all the population on Fukushima, two million, have to go for medical checks every year.”

Hiromichi suspects an outbreak of thyroid cancer over the next few years. Already, according to local reports, 107 cases of thyroid cancer have been confirmed. Yet, the gestation period for radiation’s effect is 5-40 years. And, this is only the fourth year.

He believes the Japanese people are not well informed. They only see the limited thyroid cancer cases so far even though those are merely an early harbinger, only foreshadowing the beginning of a long process of widespread complications for years to come. As well, it is doubtful people want to face the brutal truth; avoidance is an easy way out when fear reigns supreme.

Additionally, it is likely that widespread health problems will occur well beyond the limits of Fukushima Prefecture. The radioactive plume traveled notably beyond the immediate area. In March, in the immediate aftermath of the explosions, the plume traveled to Tokyo. “The area between Fukushima and Tokyo has some huge hotspots. In the northern Tokyo metropolitan area, also huge hotspots. Over the eastern region of Japan, the radioactive plume spread across a huge area.” 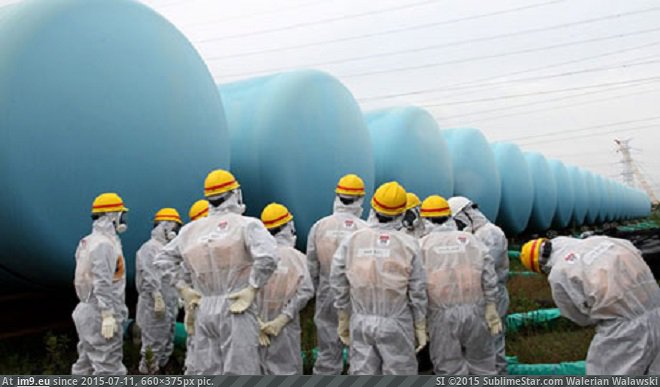 Hiromichi met with families of Fukushima Prefecture. The accident triggered bizarre behavior amongst families and within communities. The first reaction of family members was to evacuate their children to the next prefectures. But, complications arose, for example, “The problem happened because… first fathers tried to evacuate with their families… in those places where the evacuees reached, the fathers could not find a job. So, the fathers went back to their hometowns to their former jobs although the hometown was contaminated.”

The families of Fukushima squabbled and divided over issues of whether to leave their homes, sometimes leaving behind stubborn family members who refused to leave their lifetime residence. As well, entire communities divided into camps of pro-evacuation versus anti-evacuation, leading to conflict, arguments with old friends labeled as traitors.

Along the way, people experience horrible depression, drinking problems, headaches, vomiting, and loss of appetite, symptoms which are outside of physical normality.

Hiromichi’s story leaves one dangling, wondering what’s to become of the tens of thousands who are homeless to this day, what happens to those who live in fear, to the depressed who now view life as meaningless. And, to those who have already returned to fringe areas.

His is the inside story, the bitter truth behind the recklessness inherent within the complexity of nuclear power generation, toying with enormous untamed power, like wild horses on the plains, originated from e=mc2.

Still, to this day, purportedly, “More people have died from stress-related causes than from the initial disasters in Fukushima,” Alexis Dudden, professor of history, University of Connecticut, The Fourth Winter of Fukushima, Truthout, Jan. 4, 2015.

Beyond that, as time marches on, it is almost certain to bring on a perniciousness of cancer-related complications of unconscionable consequence, look at Chernobyl (1986) where to this day, in the still-contaminated villages and towns of Ukraine and Belarus children are horribly deformed without torsos and babies genetically mutated born without thighs or without fingers and where the “Chernobyl necklace” or thyroid cancer is universally widespread (Source: John Vidal, Nuclear’s Green Cheerleaders Forget Chernobyl at Our Peril, The Guardian, April 1, 2011). It’s 30 years later, and it continues!

Green Cross International, which is committed to phasing out nuclear energy worldwide, issued a report d/d March 9, 2015: Fukushima Daiichi Power Plant Disaster: How many people were affected? 2015 Report. According to Adam Koniuszewski, Chief Operating Office of Green Cross International: “Our local presence and ongoing activities to help the communities… gives us a first-hand experience of the human and environmental consequences of nuclear disasters.”

Estimates of radiation fallout, as obtained by Green Cross Int’l, show that 80% of the released radiation was deposited in the ocean and the other 20% dispersed within a 50 km radius. Over time, the overall risk of cancer will increase, especially for children at risk for entire lifetimes.

“Approximately 32 million people in Japan are affected by the radioactive fallout from the nuclear disaster in Fukushima.”

“The number of deaths from the nuclear disaster attributed to stress, fatigue and hardship of living as evacuees is estimated to be around 1,700 so far.”

So it goes, the long reach of radiation exposure is only starting as the gestation period runs 5-to-40 years. Not only that but the Fukushima Power Plant is still white hot, very hot. Despairingly, the melted core is somewhere inside of or outside of the nuclear containment vessels, nobody knows where, an enormous problem riddled with unforeseen danger for the environment, for humanity, maybe forever.

Why is Japan brazenly restarting nuclear power plants in the face of Fukushima’s continuing calamity, a tragedy that has only just started?

Robert Hunziker (MA, economic history) is a freelance writer and environmental journalist whose articles have been translated into foreign languages and appeared in over 50 journals, magazines, and sites worldwide. He can be contacted at: roberthunziker@icloud.com