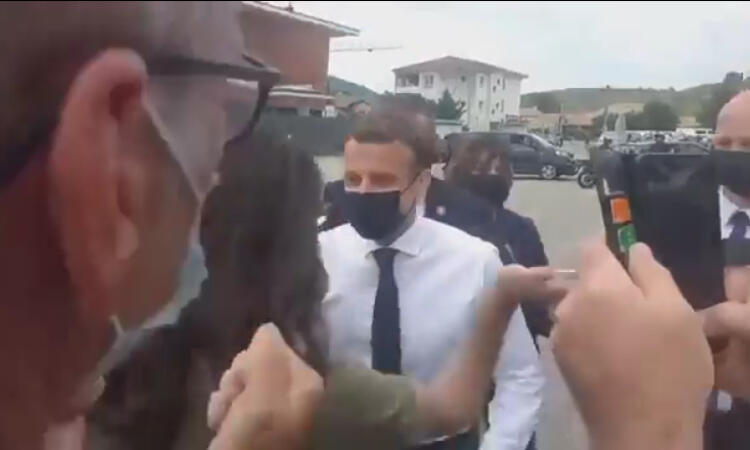 French President Emmanuel Macron called for world government in a speech Friday, claiming it would avoid conflicts between competing superpowers.

Source: Video: Day After Macron Called For A Single World Order A French Citizen Decides To Slap Him In The Face Again – Red State Nation

“Are you on the U.S. side or the Communist China side?” Macron asked rhetorically. “Because now, progressively, a lot of people would like to see that there are two orders in this world.”

“This is a huge mistake — even for both the U.S. and Communist China,” he added after comparing the two superpowers to “big elephants” in the geopolitical “jungle.”

After his implicit call for the end of national sovereignty, Macron lectured nations to “respect” the other’s “sovereignty” while pursuing “inclusive, sustainable” policies together.

“A dynamic balance is the best way for nations to avoid being forced to choose between superpowers. Countries have to pursue inclusive, sustainable development to address inequality and instability,” he said. “You compete, all of us want to win. But you have to respect the sovereignty of the other one.”

“I am sure that the only way to have a win-win game is to cooperate and to accept that all the members of the different regions of this world, will make their life easier and better at the end of the day,” he added.

Macron even claimed France does not “believe in hegemony” despite just calling for a hegemonic “global order.”

The next day the French President Emmanuel Macron got slapped in the face by a man in the crowd on the streets in France.

French Police have made two arrests after the French president was slapped in the face.

He was slapped by a man in the crowd during a walkabout session in France’s Drome region.

DW News reports that the incident happened as Macron was in the southeast region meeting with restaurant owners and students to discuss how the COVID lockdown in the country is easing and life is returning to normal.

As he was extending his hand to shake hands with the person, the man shocked everyone when he decide to strike him.

The individual, whose name slapped him was reportedly heard chanting “Montjoie Saint Denis” during the incident—a French army battle cry from the time when the nation was still a monarchy.

This is the second attack on Macron as he was slapped by another person last year!