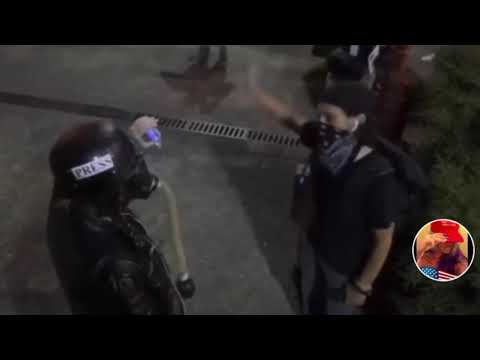 Eugene, Oregon July 27th: Independent journalist exercised his 2nd amendment to open carry when bringing a gun to the Eugene Black Lives Matter protest. While the crowd was chanting “All cops are bastards” he was confronted by a protester – after which the crowd chased him away (they did not hurt him, and nothing more happened after he fled the area – however, it appears police stopped the chase of him).

Press carrying firearm at BLM protest in Eugene, Oregon chased away by the crowd

In the United States, open carry refers to the practice of “openly carrying a firearm in public”, as distinguished from concealed carry, where firearms cannot be seen by the casual observer. To “carry” in this context indicates that the firearm is kept readily accessible on the person, within a holster or attached to a sling. “Carrying” a firearm directly in the hands, particularly in a firing position or combat stance, is also known as “brandishing” and may constitute a serious crime.