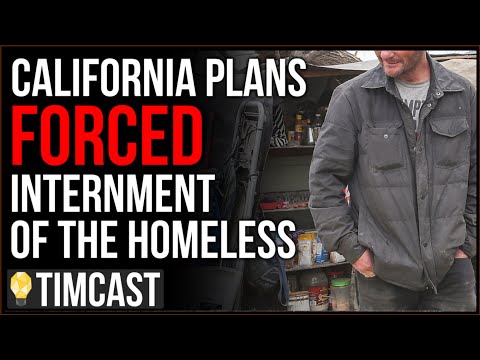 California Plans FORCED Internment And Asset Seizure To Solve Homeless Crisis. California’s growing homeless crisis has made headlines over the past year. Diseases are rampant and state and local governments have failed to do anything to solve the problem.

A new state law would allow the state to forcefully “conserve” people with mental illness meaning that if you are homeless and determined to be not “self sufficient” the state can detain you and seize and control your finances until you prove yourself to be “self sufficient.”

In one town, Redding, they have proposed this in a letter sent to Governor Gavin Newson demanding state of emergency powers. This would allow them to essentially detain any person who is “unhoused” and take control of their finances.

While California as a whole is a fairly leftist state and Democrats have proposed a state law to “conserve” the homeless, Redding is in a Republican district.

The revolutionary system converts human remains into soil as an alternative to cremation or burial. (TMU) — In a move hailed as a positive step by environmentalists, Washington became the first U.S. state to legalize the composting of human bodies in May of this year.

And now, the Evergreen State will become home to the world’s first human composting facility in 2021 thanks to Katrina Spade, founder and CEO of Recompose, after the legislation she helped enact goes into effect in May 2020.

According to its website, Spade founded the revolutionary company with the goal of offering “natural organic reduction to the public,” a system that converts human remains into soil as an alternative to cremation or burial.

“By converting human remains into soil, we minimize waste, avoid polluting groundwater with embalming fluid, and prevent the emissions of CO2 from cremation and from the manufacturing of caskets, headstones, and grave liners.

By allowing organic processes to transform our bodies and those of our loved ones into a useful soil amendment, we help to strengthen our relationship to the natural cycles while enriching the earth.”

In November, around 75 people attended what was described by the Seattle Times as “a housewarming party for a funeral home where bodies would not be burned or buried, but laid in individual vessels to become clean, usable compost.”

Spade told the crowd, made up of investors, doctors, architects, funeral directors, legislators, and lawyers:

“You are all members of the death-care revolution.”

When all is said and done, the process will yield about a cubic yard of soil per person. The soil can be taken home by friends or family and used to grow a tree or a garden. Remaining soil will be used on 640 acres of conservation land in southern Washington that will one day become an ecologically sustainable village.

In contrast, those who have opted to be cremated as a means to save money or take up less space geographically, have inadvertently left a burden on their family members. Spade explained:

“These days, some families regard even ashes from cremation as a burden, not a joy. As in, ‘we’ve had these ashes in the garage for six years.’ And we’re creating a cubic yard of soil.”

While Recompose is not yet up and running, the company is aiming for a $5,500 price tag for its natural organic reduction services while a green burial in the state of Washington averages around $6,000, cremation can range anywhere from $1,000-$7,000, and a conventional burial in a cemetery can set you back at least $8,000.

The idea may seem outlandish or uncomfortable to some, but Recompose is more than just a pipe dream. As an architecture student, Spade first became interested in the funeral industry back in 2012. She quickly delved into the idea of “environmentally sustainable, urban-focused method of disposition of the dead,” after seeing a lack of environmental ethic in both the cremation and burial industries.

In 2014 Spade’s idea took a turn toward reality when she received the Echoing Green Climate Fellowship. With the funding that followed she founded the non-profit Urban Death Project (UDP) and began working with soil science researchers, law professionals, and those in the funeral industry to lay the groundwork for a revolutionary system of death care the world had never seen.

Over the next few years Spade continued to work on UDP before securing over $90,000 via a Kickstarter campaign. Her idea also reached wide audiences through worldwide media coverage.

Then in 2017 Space founded Recompose, a public benefit corporation, to bring her idea to reality—a reality now taking shape in a warehouse in SoDo, where the company is ready to live out their mission to “offer a new form of death care that honors both our loved ones and the planet earth.”