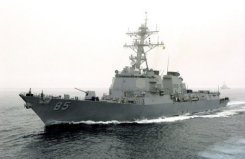 WASHINGTON (AFP) – A US Navy destroyer intercepted a North Korean cargo ship in the South China Sea suspected of carrying missiles or other weapons and made it turn back, officials said Monday.

The cargo ship, the M/V Light, may have been headed to Myanmar with military contraband, Gary Samore, special assistant to President Barack Obama on weapons of mass destruction, told the South Korean Yonhap news agency.

The New York Times, which first reported the incident, said the ship was intercepted south of the Chinese city of Shanghai by a US destroyer on May 26.

The North Korean ship was registered in Belize, whose government gave the United States permission to board and inspect the ship, Samore and Pentagon officials said.

“The US Navy also contacted the North Korean ship as it was sailing, to ask them where they were going and what cargo they were carrying.”

The USS McCampbell, a guided-missile destroyer, then requested permission to board the M/V Light and was refused by the ship’s master, who said it was a North Korean ship, Pentagon spokesman Colonel Dave Lapan told reporters.

The US destroyer continued to track the vessel which eventually headed back to North Korea on May 29 “in order to avoid inspection,” Lapan said.

“We believe that those signs point to the fact that it was carrying an illicit cargo in violation of the UN Security Council resolutions,” he said.