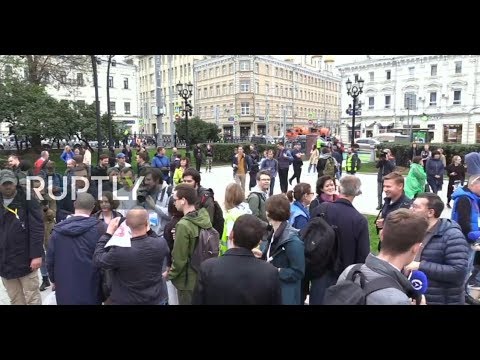 Unauthorised rally in support of disqualified candidates for city council elections takes place in the centre of Moscow on Saturday, August 17.

People are expected to gather at several spots along the city’s Boulevard Ring to take part in pickets demanding fair elections. Similar protests took place in the capital on the past three weekends, with law enforcement detaining around 1,500 people in total.

In July, the Russian Central Election Commission turned down 57 candidates for the Moscow City Duma, claiming irregularities in their applications. Among the barred candidates were members of the opposition Ilya Yashin, Lyubov Sobol, Dmitry Gudkov and Ivan Zhdanov, who claimed the decision was political.

The commission said the signatures were considered invalid due to “inconsistency of information in passport data, including addresses of residence, signatures of non-existent or even dead voters.”

The Moscow City Duma elections are scheduled for September 8.

Unsanctioned protests continue in Moscow ahead of city council elections