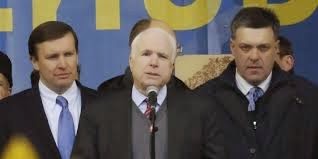 Ukrainian President Petro Poroshenko announced that Sen. John McCain (R-AZ) was to take up an official part-time government post in Kiev on Wednesday — apparently without clearing it with McCain, who says he never signed off on the gig.

A decree published on Poroshenko’s website on Wednesday lists McCain as one of eight foreign members of a presidential advisory group headed by Mikheil Saakashvili, the former Georgian leader who has found a new lease of life in Ukraine as a political gadfly and government aide.

McCain told BuzzFeed News, however, that he never agreed to do it. “I was asked to do it both by Ukraine and Saakashvili and I said I would be inclined to do it but I said I needed to look at all the nuances of it, whether it’s legal under our ethics and all that kind of stuff,” he told BuzzFeed News. “I of course would love do anything I can to help Ukraine, but I’ve got to make sure it’s ok under Senate rules.” …. http://www.buzzfeed.com