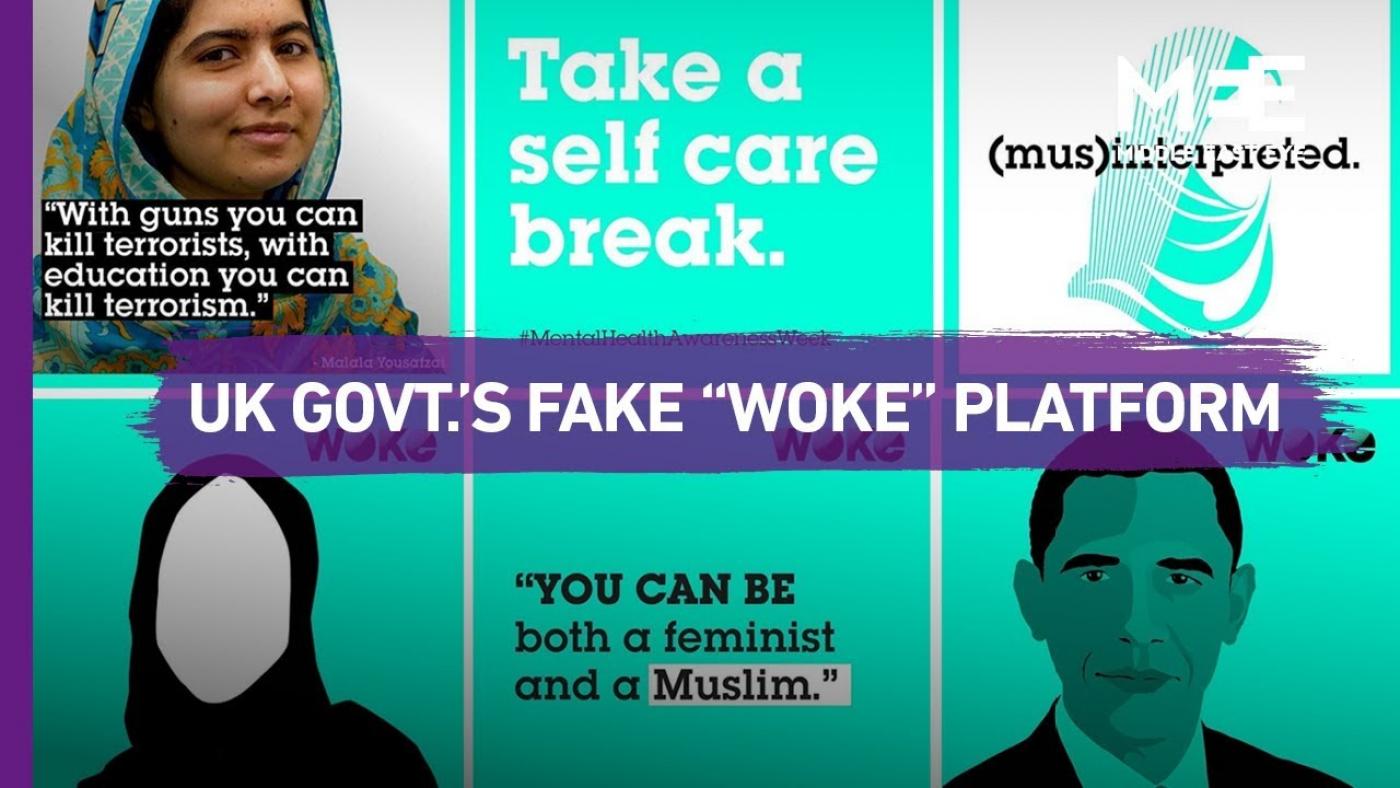 This glitzy, youthful ‘news company’ warns of the dangers of fake news. In fact, it’s part of the Home Office’s Prevent strategy

A social media network for young people that has been launched around the term “woke” is actually a covert British government counterterrorism programme, security officials have admitted.

A Facebook page and Instagram feed with the name This Is Woke describes itself as the work of a “media/news company” that is engaging “in critical discussions around Muslim identity, tradition and reform”.

In fact, it was created by a media company on behalf of the Office for Security and Counter-Terrorism (OSCT) at the UK Home Office.

The OSCT is refusing to disclose information about the network, however, and will not explain the reason it was created, claiming that to do so would “prejudice the national security of the UK”. 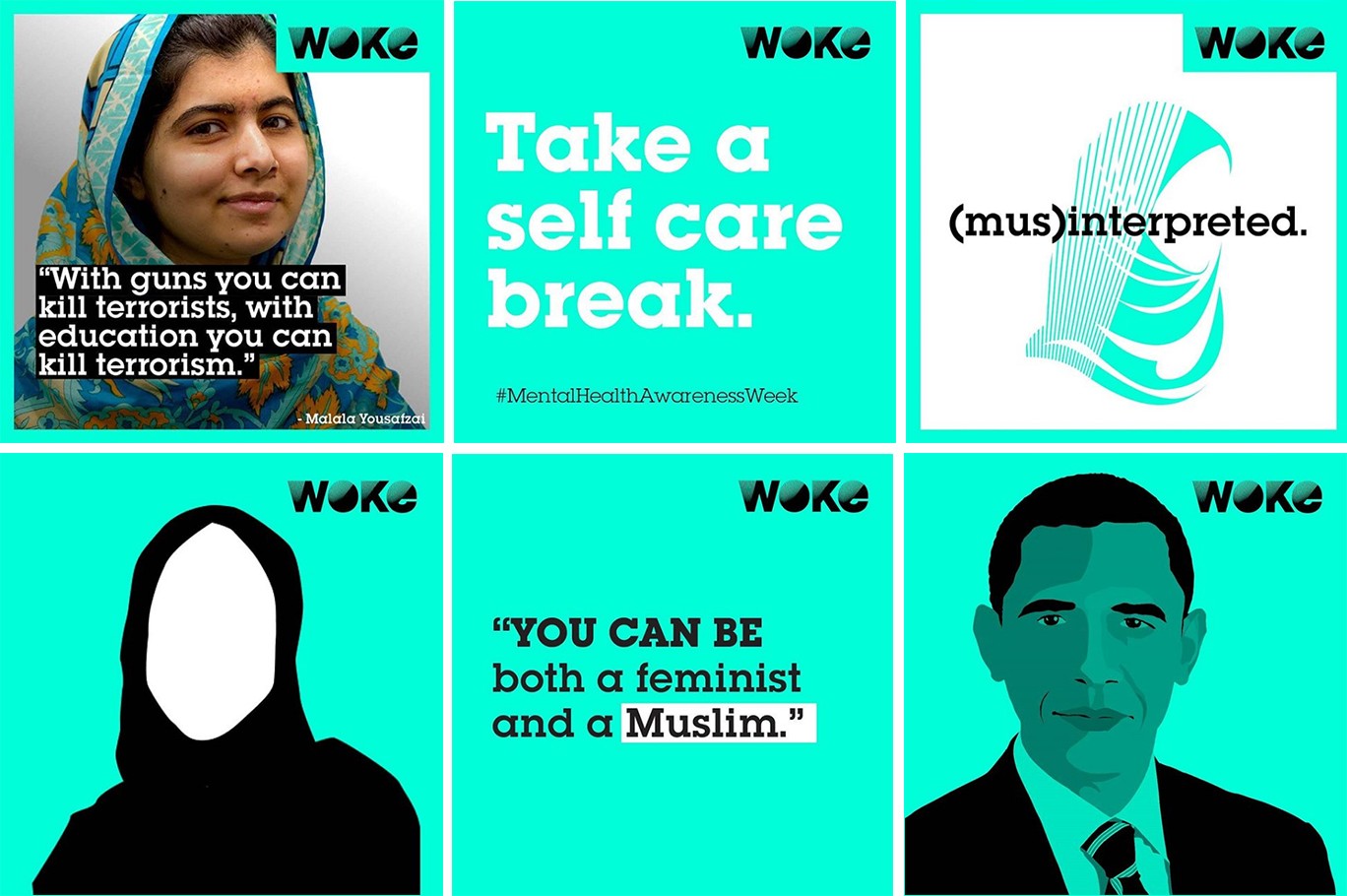 This Is Woke draws upon the popular expression “stay woke”, a call – originally African-American – to remain aware of social and racial justice issues.

Launched earlier this year, the network features videos with titles such as “A trillion ton iceberg has broken off Antarctica” and “Millions of pangolins are hunted each year”.

Alongside them are other videos with titles such as “It’s time to hold extremism to account for terrorism, not Islam”. This video went viral, being viewed 1.7 million times.

It also features videos of short panel discussions, with four young people sitting on a sofa debating subjects such as “Will we all become vegan?” and “Are dating apps the way forward?”, interspersed among these are videos with titles such as “What does wearing a hijab mean to you?”

One discussion video on the This Is Woke Facebook page is entitled “What is fake news?” The four young participants offer contributions such as “online, we can never know who the source is” and “we have to train ourselves against what’s going on out there”.

They are then filmed on the street, conducting vox pops among members of the public and asking them: “How do you know the news you hear is real?”

The content of the This Is Woke Instagram feed includes quotations from Martin Luther King Jr., Nelson Mandela and one from Umar ibn al-Khattab, the second Islamic caliph – “sometimes the people with the worst past, create the best future”. There are also photographs of smiling women in hijabs.

The content of the Facebook page and Instagram feed was created for the OSCT by a London-based communications company, Breakthrough Media, several people with knowledge of the project have confirmed.

When Middle East Eye asked the Home Office for information about the project, under the terms of the UK’s Freedom of Information Act, the OSCT confirmed that it held such material but refused to disclose any, citing the section of the act that concerns national security.

While acknowledging that there was a public interest in transparency surrounding such projects, the OSCT said that national security concerns were “of overriding importance”.

Disclosure of information about This Is Woke “would open up detailed information about organisations and individuals who are engaged in the delivery of, and who are supporting activities to prevent terrorism”, the OSCT said.

“This includes activity to disrupt those who promote terrorism, and protect individuals who are vulnerable to recruitment, or who have already been recruited by extremists.”

As a consequence, disclosure of any information about This Is Woke under the Freedom of Information Act would “undermine the effectiveness of the Home Office strategies, and hence weaken and prejudice the national security of the UK”.

As well as refusing the request made under the Freedom of Information Act, the Home Office declined to answer a number of questions about This Is Woke, including queries about the project’s objectives and methods, and the deception involved. Nor would it respond to a suggestion that it could be accused of generating a form of “fake news”.

Instead, the Home Office issued a statement which said: “We are committed to using all of the tools available to counter the threat from terrorism in the UK.

“The Home Office works in partnership with a range of organisations from across civil society, industry, private and public sectors to reduce vulnerabilities to organised criminal, extremist and terrorist threats in the UK.”

The project is part of the UK’s controversial counter-radicalisation programme known as Prevent, which is one of the four main strands of the UK’s counterterrorism strategy.

As part of this programme, a secretive unit within the OSCT called the Research Information and Communications Unit (RICU) has for several years been mounting covert propaganda campaigns.

After an overhaul of Prevent in 2011, Theresa May, then the UK’s home secretary, told a parliamentary committee which provides some oversight of the OSCT that RICU was “road-testing some quite innovative approaches to counter-ideological messages”.

Internal RICU documents seen by MEE show that these messages are intended “to effect behavioural and attitudinal change” among what the unit terms “Prevent audiences”. These are defined as British Muslims, particularly males, aged 15 to 39.

Meanwhile, Breakthrough Media – which has in the past been RICU’s favoured private-sector contractor – says privately, in internal papers, that its work on behalf of the unit is intended to “promote a reconciled British Muslim identity”.

Breakthrough has recently changed its name to Zinc Network, a move that started in Australia, where the company had been caught persuading Muslims and a Christian clergyman to promote Australian government policies, without explicitly informing these individuals that it was working for the government.

Zinc Network also refused to answer questions about the project and the deception involved.

In a statement, the company said: “Zinc Network is enormously proud of the work we undertake for our clients.

“Providing support to communities, brands and governments to promote positive social change and tackle some of the most complex issues in the world today is the driving force of our agency.”

‘An industrial scale and pace’

This Is Woke is just a small part of the material that is being produced in the UK under the direction of RICU: in other internal documents, the unit says it is working “at an industrial scale and pace”.

Past projects include a website, Facebook page, Twitter feed and leafleting campaign called Help for Syria, that appeared to be a charitable venture but was in fact a “strategic communications platform” intended to influence conversations among young British Muslims and reduce any desire to travel to Syria.

Former Home Office officials say RICU has also been working to influence the arts in the UK, and government lawyers have moved to block the disclosure of material that would show the role it has played in the production of supposedly independent radio shows.

As well as producing campaigns directed at Muslim audiences in the UK, Breakthrough/Zinc has been helping RICU with projects that are aimed at Muslims in France, Belgium, North Africa and the Middle East, Kenya, Bangladesh and Indonesia.

Earlier this year, MEE reported that techniques developed within the Prevent programme have been used more widely to influence the general population in the UK, in particular in the aftermath of terrorist incidents, through social media campaigns that are devised in advance of such attacks.

The people who participated in the This Is Woke panel discussions are identified only by their first names in the videos posted on Facebook. It is unclear how much they were told about the underlying purpose of the project.

One who spoke to MEE said that when contacted by Breakthrough Media and asked to take part, he was informed that the company had a number of government contracts, but said he was not explicitly told that This Is Woke was part of the Prevent programme.

Asad Dhunna, a marketing consultant, said: “If I had known that, I would have approached it differently. I would have asked a lot more questions.”

The women who were interviewed for the video entitled “What does wearing a hijab mean to you?” were approached on the campus of the School of Oriental and African Studies, part of the University of London, and asked whether they would participate in a film marking International Women’s Day.

“That’s what the team from Breakthrough said,” says one, Elif Kalin. “We certainly weren’t told that it was anything to do with the Prevent programme.”

Prevent has proved to be one of UK’s most polarising programmes.

Some in police and government insist it is a vital counterterrorism tool that includes measures to safeguard vulnerable individuals; its critics argue that it is intrusive, discriminates against Muslims and encourages the state to search for threats where they do not exist.

A number of people who have been involved in the delivery of RICU’s propaganda projects say privately that they have serious misgivings about the work that they have done.

Earlier this month the UK’s most senior counterterrorism police officer, Neil Basu, an assistant commissioner at Scotland Yard, appeared to suggest that both supporters and critics of Prevent had a point. In an interview, he said that the programme was a vital part of the country’s counterterrorism strategy, but that it had been “badly handled” and should be more transparent.

The Home Office declined to comment directly on Basu’s criticism, but in its statement to MEE said: “The Prevent programme continues to play a vital role in this fight against radicalisation and has had a significant impact in stopping people being drawn into terrorism.”