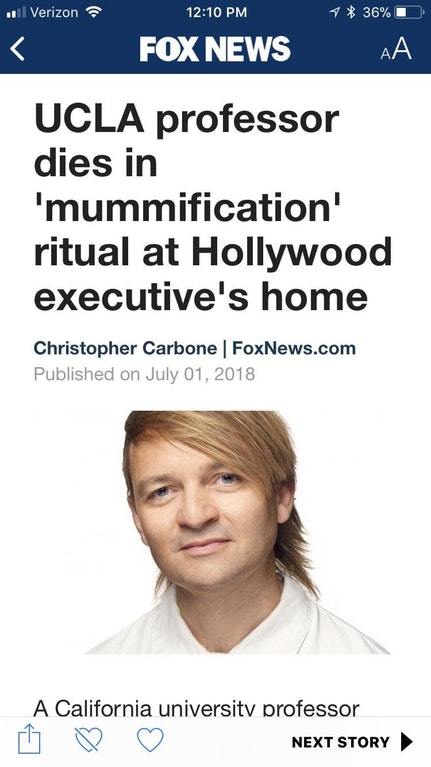 A California university professor died during a bondage session at the home of a Hollywood executive that went horribly wrong.

George, who was born Duncan Gilbert and did not use gendered pronouns, had been wrapped “head to toe in plastic wrap and gaffer’s tape, with small breathing holes at the nose and mouth,” according to an autopsy report obtained late last week by Variety.

George, who had a 16-year relationship with a man named Barry Shils that allowed for sexual activity outside their partnership, had become a regular playmate of Chasey’s over the course of seven months preceeding his death.

When parademics arrived, they were unable to revive George.

The coroner’s office was unable to determine the cause of death and Chasey has not been charged with any wrongdoing, reports Variety.

Chasey’s lawyer, John Duran, told Variety that the two were participating in consensual activity and noted that the coroner did not conclude that the wrapping was the cause of George’s death.

Virginia is now under a stay-at-home order as of Monday afternoon. The order takes effect immediately and will remain in place until June 10.