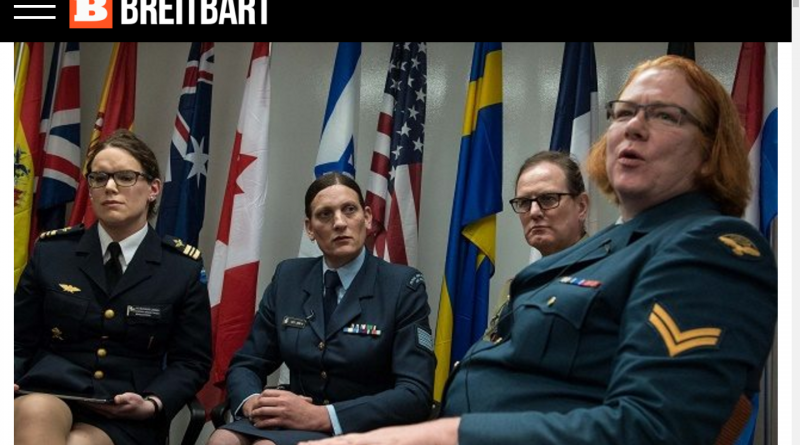 “it looks like a sixties military theme drag party at the Taximeter Club! Wasn’t there once a fine line between being out and being respectful of the uniform” Military personnel who wish to dress as the opposite sex may now do so, according to an announcement from Defense Secretary Ashton B. Carter.

Carter said, however, that new recruits would have to crossdress for at least 18 months prior to joining the military, presumably to avoid last-minute transitions from one mode of dress to another. Still, if a member of the armed forces wishes to swap genders while serving on active duty, that person may be able to do so “if a military medical provider determines it is necessary,” according to reports.

If any soldier would like to take a further step and undergo gender reassignment surgery, the Pentagon would cover the medical costs, Carter added.

“Effective immediately, transgender Americans may serve openly,” Carter said. “They can no longer be discharged or otherwise separated from the military just for being transgender.” More at Source

This is from a gay maerican male. His comments, not ours:

“…it looks like a sixties military theme drag party at the Taximeter Club! Wasn’t there once a fine line between being out and being respectful of the uniform? Edward James from the Dolls House” 1. SQNLDR Humphries and MAJ Harding are post transition women and contributed their personal experiences transitioning in Defence and supporting other personnel who are undergoing gender transitioning to the conference. SQNLDR Chong represented Diversity Directorate to provide insight into diversity and inclusive policy for transgender people in the ADF and his experiences providing support to LGBTI people of the ADF.

Background2. The aim of the conference was to gather experiential evidence from transgender service members from countries that allow open transgender service to answer the question “Would it be possible for transgender personnel to serve in the US military”. Australia is one of 18 countries that allow transgender members to serve.1 This academic conference was co-hosted by the Palm Center at the University of San Francisco, and the American Civil Liberties Union in Washington DC. Travel costs for attendees were substantially funded by the Palm Center, with the exception of meals, incidentals, ground transportation and a component of airfares.

3. Service chiefs provided approval for attendees to represent their services at the conference. LTCOL Phillip Hills from ADS(W) attended at the request of O/VCDF given that VCDF could not attend.

Key Themes Communicated During the Conference

5. MAJ Harding was a panelists for the session “Foreign Military Experiences: Transgender Troops Tell Their Stories”. Her presentation included these key themes:

c. The aim of treatment is to relieve the dysphoria and not to change men into women and vice versa.

6. SQNLDR Humphries was a panelist for the session ”Deployment in Austere Conditions: Stories from Combat Zones”. Her presentation included these key themes:

7. SQNLDR Chong was a panelist for the session “Lessons Learned and Best Practices”. His presentation included these key themes:

8. The director of the Palm Centre Professor Aaron Belkin established that the parameters for the meeting were to gather evidence from experience in an academic fashion and specifically disallowed political commentary. Attendees provided no views about any US policy during the conference. Separate media interviews were not conducted.

9. International participants recognized the RAAF Handbook on Gender transition was as being the most comprehensive guide available for military forces and civil services.

10. Mainstream media reporting of the conference internationally has been positive. Quotes from attendees are consistent with ADF values, and the ADF Diversity and Inclusion Strategy. Examples of positive reports include:

11. It is recommended that DPG:

12. The prospect of gender transition is daunting to both the member involved and the chain of command. Equity, good leadership and a policy frame work makes the process less daunting and helps the member transition as expeditiously as possible. Further engagement with the Palm Center and international partners on policies surrounding gender transition would be advantageous to Defence.

The Medical woman in the Army uniform even has this little rainbow accoutrement to her uniquely tailored uniform. Finally (really) the conference was hosted by the ACLU – here are some of the causes it goes in to bat for.

And now for the rest of the story… Apparently this is what the “populace” wants…?