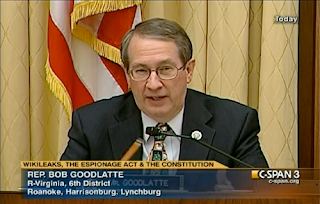 The ongoing saga of the communications with my Virginia elected officials continues (see: here, here, and here). Today, I received a somewhat surprising email response from U.S. Congressman Bob Goodlatte (R-VA) in which he appears to know more about the issues than has been indicated by the letters written by his cohorts.

Thank you for contacting me regarding the recent release of President Barack Obama’s birth certificate. It is good to hear from you.

A President-elect’s eligibility has traditionally been verified by public record and vetting done by the parties. It is crucial that any President-elect meet the eligibility criteria as determined by the U.S. Constitution and provide the necessary assurances of eligibility.

Currently, there is no office or agency that certifies a President-elect’s eligibility for the office. However, I believe that there should be a more formal process of review and validation as a matter of routine certification of candidates. The Office of the Presidency is undermined if Americans don’t have confidence that the candidates for the highest office in the land are qualified for the position as required by the Constitution.

As you know, President Obama recently released to the public the long-form version of his birth certificate. Since then, concerns have been raised about the validity of the birth certificate as well as the claim that the President has been using a Social Security Number previously issued to another person. These concerns have been raised with the relevant oversight committees in the Congress and if there is enough evidence and more experts reach the same conclusions then these claims will lead to an investigation.

During the last Congress I co-sponsored legislation which would require the principal campaign committee of any candidate for election to the Office of President to include with the committee’s statement of organization a copy of the candidate’s birth certificate and any other documentation necessary to establish that the candidate meets the qualifications for eligibility to the Office of President under the Constitution. This legislation would ensure that proof of eligibility is provided by candidates before each Presidential election.

While the issue of eligibility has come up in past elections, including whether Chester Arthur (our 20th President succeeding to the office upon the death of James Garfield) was born in the U. S. or Canada, never has the issue arisen as to the eligibility of both major party candidates as it did in 2008 with regard to both John McCain and Barack Obama. The public discussion, controversy, uncertainty and the undermining of the Presidency can all be avoided by a routine requirement that future candidates establish their eligibility under the Constitution.

The United States is a nation based on the rule of law. The Constitution clearly sets forth the qualifications for the Office of President, Members of the House and Senate, and members of the federal Judiciary. Any circumvention of these Constitutional requirements would be a slap in the face to the rule of law and our very Democracy. I believe that our Constitution is a solemn contract between the American people and their government. I will continue to work to ensure its terms are adhered to by all elected and appointed government officials.

Again, thanks for the benefit of your comments. Please feel free to contact me whenever I may be of assistance.

To which I replied:

Thank you for your response to my letters. Before I respond to that, please allow me to commend you for gingerly straying outside the parameters of the Jack Maskell (CRS) memo, unlike virtually every other member of Congress has done in their communications to their constituents.

That being said, I do have some pointed questions about your email to me:

While I concur with your assessment about the past, that “A President-elect’s eligibility has traditionally been verified by public record and vetting done by the parties,” and I also agree with your appraisal of the future, that “It is crucial that any President-elect meet the eligibility criteria as determined by the U.S. Constitution and provide the necessary assurances of eligibility,” and I am pleased at the steps you have taken to try to resolve the matter in the future, what I find to be glaringly absent from your evaluation is your personal conviction and disposition toward a forthright resolution regarding the present.

More specifically, at what point did you address your House cohorts with a “Houston-we-have-a-problem” proclamation? At what point did you stand on the House floor and announce, “The growing evidence is showing that we have erred, and have not properly exercised our constitutional duties; therefore it is incumbent upon us to do so now?”

You see, as meritorious as your rudimentary understanding of the issues is, without your public outcry that you, as a sitting member of Congress, demand an independent and impartial investigation into the matter, your words appear to be barely more than rhetoric. As to your indication that “these concerns have been raised with the relevant oversight committees in the Congress and if there is enough evidence and more experts reach the same conclusions then these claims will lead to an investigation,” please excuse my lack of confidence in those committees producing anything more than the same coverup we have witnessed for nearly three years now.

Moreover, I am not sure you are aware, but a growing number of notable forensic document examiners are weighing in on their conclusions that the “long form birth certificate” is a forgery. Most recently, “Joseph M. Newcomer, who exposed the ‘Killian documents’ as fraudulent in 2004,” has stated, “the Obama birth certificate released by the White House April 27 is a ‘highly suspicious’ document that deserves professional forensic examination. ‘There is something deeply wrong here. There are artifacts in the birth certificate document that are strongly suggestive of a forgery. The document screams out that something is wrong.’” (wnd.com )

Yeah, we have all the faith in the world that the “relevant oversight committees” are all over this. NOT!

While I am impressed at your inclusion of the Chester Arthur debacle, it doesn’t seem you’ve quite obtained the entire story. You are correct that there was murmuring that occurred surrounding his birthplace (US or Canada); however, his avoidance of the truth had nothing to do with his birthplace, but with his father’s Canadian citizenship at the time of Chester’s birth. Arthur’s father did not become a naturalized citizen until Chester was nearly 14 years old, but Chester was indeed born in the United States. Further proof that Arthur understood the meaning of “natural born Citizen” and was aware that his father’s foreign citizenship precluded his attaining that status at birth, is the fact that Arthur had all of his pertinent documentation burned. Yes, both Chester Arthur and Barack Obama lied to the American people. The only difference is that Arthur didn’t have a copy of Photoshop.

As you stated, “The United States is a nation based on the rule of law;” and I concur with you. But, as I have pointed out, your response to me seems to imply that you perceive the rule of law to have applied to our past, and you desire the rule of law to govern our future, but you appear quite ambivalent toward it’s being enforced in the present.

In my last letter to you, I cited Title 18 U.S.C. Chapter 1, § 4 a law that applies equally to all American citizens (which includes the members of Congress). Because your response didn’t seem to indicate any specific action on your part against the crimes that have been committed, I must again ask,

“Why are you not guilty of misprision of felony?”

I look forward to your response.

For our Constitution,
Dean C. Haskins

I will continue to keep you apprised of any and all developments as I strive to persuade the great Commonwealth of Virginia to lead the way in rectifying the constitutional crisis that has been created by the usurpation of our presidency.

Cross-posted with permission. Previous columns by Dean Haskins can be found at Canada Free Press here.