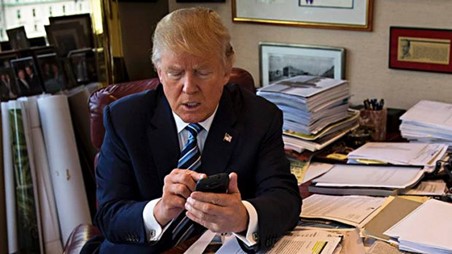 The Ron Paul Institute for Peace and Prosperity :

Twitter does not claim that the two posts for which Trump is banned actually contain anything whatsoever troublesome. Instead, Twitter says Trump is banned from Twitter because of how the two tweets “are being received and interpreted on and off Twitter.”

Of course, Trump has no control over how people receive and interpret what he posts. Neither do you, me, or anyone regarding any posts we may make at Twitter. Nonetheless, Twitter claims it has banned Trump because Twitter has taken a disliking to what it says are some people’s receptions and interpretations regarding two of Trump’s tweets.

It’s over people. Nothing you can do can ensure Twitter does not deem you, like Trump, as having run afoul of its rules and thus being subject to banning.

“The 75,000,000 great American Patriots who voted for me, AMERICA FIRST, and MAKE AMERICA GREAT AGAIN, will have a GIANT VOICE long into the future. They will not be disrespected or treated unfairly in any way, shape or form!!!”

“To all of those who have asked, I will not be going to the Inauguration on January 20th.”

Twitter declares in its announcement that these two tweets violate Twitter’s “Glorification of Violence Policy.” Glorification of violence? Give me a break. The man spoke positively about the future of people who voted for him and said he will not attend the United States presidential inauguration later this month. That’s it — no violence glorification whatsoever.

Since there is nothing troublesome in Trump’s own words posted at Twitter, the Twitter announcement engages in a creative writing exercise of how some people may receive and interpret Trump’s words in ways that Twitter finds disturbing or related to violence. The announcement includes this list of factors that Twitter says are among the reasons for banning Trump from the site:

– President Trump’s statement that he will not be attending the Inauguration is being received by a number of his supporters as further confirmation that the election was not legitimate and is seen as him disavowing his previous claim made via two Tweets (1, 2) by his Deputy Chief of Staff, Dan Scavino, that there would be an “orderly transition” on January 20th.

– The second Tweet may also serve as encouragement to those potentially considering violent acts that the Inauguration would be a “safe” target, as he will not be attending.

– The use of the words “American Patriots” to describe some of his supporters is also being interpreted as support for those committing violent acts at the US Capitol.

– The mention of his supporters having a “GIANT VOICE long into the future” and that “They will not be disrespected or treated unfairly in any way, shape or form!!!” is being interpreted as further indication that President Trump does not plan to facilitate an “orderly transition” and instead that he plans to continue to support, empower, and shield those who believe he won the election.

– Plans for future armed protests have already begun proliferating on and off-Twitter, including a proposed secondary attack on the US Capitol and state capitol buildings on January 17, 2021.

Give me a break. Couldn’t Twitter just keep it simple:

Think you are safe from being banned by Twitter? Think again.

Source: The Ron Paul Institute for Peace and Prosperity : Twitter’s Outrageous Reason Offered for Permanently Banning President Donald Trump from Twitter Could Be Used to Ban Anyone