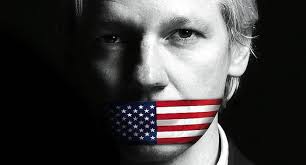 Christine Assange, the mother of WikiLeaks founder Julian Assange, has used her Twitter page to criticize the United States government effort to prosecute and imprison her son for making available leaked information exposing abusive government actions, as well as her son’s harsh treatment — including a prohibition on his communication with the outside world — over the last year at Ecuador’s London embassy where he obtained sanctuary in 2012. Now, Joe Lauria reports at Consortium News, public access to Christine Assange’s Twitter account has been restricted and she has been prevented from posting at her account.

Lauria relates Christine Assange has written in a text that the placing of limitations on her Twitter account “followed on from a day of my tweets about free speech and calling on journalists globally to stand up for Julian.”

In September of 2017, a few months before the Ecuador embassy prevented Julian Assange from communicating with the outside world, Assange spoke at a Ron Paul Institute conference via live video. His speech was largely focused on opposing war, the US empire, and the military-industrial complex. Watching the speech, there is little wonder why powerful warmongers would want to silence both Julian Assange and his mother, who is a vocal and effective advocate for her son and his work with the WikiLeaks media organization. You can watch Julian Assange’s speech here:

Source: The Ron Paul Institute for Peace and Prosperity : Twitter Prevents Julian Assange’s Mom from Posting, Restricts Viewing of Her Past Posts