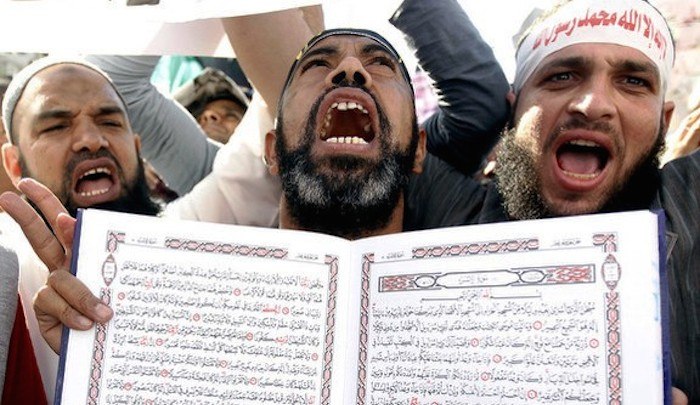 Remember when Barack Obama took control of the Internet away from the United States and gave it to an international organization, the Internet Corporation for Assigned Names and Numbers (ICANN)? Conservatives warned then that giving control of the primary means of communication to an international body could threaten the freedom of speech, and they were derided as hysterical. But now they’ve been proven correct: the social media giants are all Sharia-compliant.

The correspondence claims that the following content is in violation of Pakistan law:Section 37 of PECA-2016, Section 295 B and Section 295 C of the Pakistan penal code

This notice is not legal advice. You may wish to consult legal counsel about this matter. If you believe we have contacted you in error, please let us know by replying to this email.

Click on the Twitter link, and you’ll see that the tweet in question is an advertisement for Jamie’s new book, Jihadist Psychopath. In Pakistan, jihadists aren’t psychopaths, they’re heroes.

Note also that Pakistan is accusing Glazov of being in violation of sections 295B and 295C of its penal code. Section 295B criminalizes “defiling the Holy Quran,” and carries a penalty of life imprisonment. 295C mandates that those who “by words, either spoken or written, or by visible representation, or by any imputation innuendo, or insinuation, directly, defiles the sacred name of the Holy Prophet Muhammad (PBUH) shall be punished with death, or imprisonment for life and shall also be liable for fine.” Yes, death and a fine.

Glazov is not alone in this. Pamela Geller received a notice from Twitter that she was in violation of Pakistani law for a tweet that noted correctly that Al Arabiya had criticized Linda Sarsour as a Muslim Brotherhood operative. Ensaf Haidar, the wife of Raif Badawi, who has been languishing for years in a Saudi prison for “insulting Islam,” got the notice for a tweet criticizing the niqab. Twitter has also notified Canadian columnist Anthony Furey and reformist imam Mohammed Tawhidi that they have violated Pakistani law.

I haven’t. It makes me wonder what I have to do to offend the Pakistani government.

Meanwhile, “a new Android app,” according to Laura Loomer at Big League Politics, “has launched with the focus of allowing Muslims to report individuals who commit blasphemy, or insult Islam.” Now, if you’re a pious Muslim, if you see something, you can say something, and make sure that those who dare to criticize the Left’s favored religion will henceforth be able to say nothing.

Big League Politics explains that “the app, ‘Smart Pakem’, which launched in Indonesia last month at the request of the Indonesian government, will allow users and government officials to uphold Sharia law and target and report people who hold ‘misguided’ beliefs in violation of Islamic law, which forbids insults of Islam, insults against the Prophet Mohammed, or the recognition of any other religion besides Islam.”

Google has been leading the way on social media Sharia-compliance for quite some time. Anwar Awlaki’s al-Qaeda recruitment lectures were offered in Google Play store app. And in 2017, Texas imam Omar Suleiman made a successful effort to compel Google to drop search results about Islam-related terms and topics that reflected negatively upon Islam. The jihad against the freedom of speech is advancing rapidly, and most people don’t even know it’s happening. Turkey’s Anadolu Agency reported that “Google’s first page results for searches of terms such as ‘jihad’, ‘shariah’ and ‘taqiyya’ now return mostly reputable explanations of the Islamic concepts. Taqiyya, which describes the circumstances under which a Muslim can conceal their belief in the face of persecution, is the sole term to feature a questionable website on the first page of results.”

Facebook is on the Sharia train, too. Facebook’s Vice President Joel Kaplan traveled to Pakistan in July 2017 to assure the Pakistani government that it would remove “anti-Islam” material. And Facebook has done so assiduously, banning numerous foes of jihad terror and twice now blocking the Jihad Watch Facebook page on spurious technical grounds.

And now Twitter is actually informing free Americans that they face life imprisonment or death for violating Islamic blasphemy laws. This is the legacy of Barack Hussein Obama.