“Turning The Tables On Big Brother:
Now Internet Users Can Watch Who Is Spying On Them”
By Rob Waugh
“Mozilla, the maker of Firefox, has unveiled a new add-on for the popular web browser that gives web users an instant view of which companies are ‘watching’ them as they browse. The move comes the same week that Google pushed ahead with its controversial new privacy policy, built to provide even more data for Google’s $28 billion advertising business – despite concerns that the massive harvesting of private data might be illegal in many countries. Google’s business is built on advertising – the company earned $28 billion from its AdWords service in 2010. Google’s new privacy policy allows it to ‘streamline’ data from Android phones, YouTube, Gmail and web browsing to target its adverts even more precisely towards individual web users. 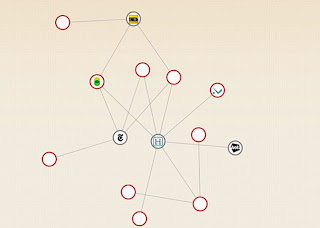 Watching the watchers: A demonstration of Collusion’s ‘real time’ view of advertisers watching – as web users browse popular sites such as IMDB (one of the grey dots), their movements are tracked by unwanted third party advertisers (the red dots).
Mozilla’s Firefox is the world’s second most popular web browser, a position under threat from Google’s own Chrome browser. The Collusion add-on is an official Mozilla product, and was unveiled at the Technology, Entertainment and Design conference this week by Mozilla CEO Gary Kovacs. It creates a ‘web’ showing web users exactly which advertising firms are watching as they browse. The Collusion add-on will allow users to ‘pull back the curtain’ on web advertising firms and other third parties that track people’s online movements, says Mozilla CEO Gary Kovacs.

‘Collusion is an experimental add-on for Firefox and allows you to see all the third parties that are tracking your movements across the Web,’ Mozilla said. ‘It will show, in real time, how that data creates a spider-web of interaction between companies and other trackers. Collusion will allow us to pull back the curtain and provide users with more information about the growing role of third parties, how data drives most Web experiences, and ultimately how little control we have over that experience and our loss of data,’ said Kovacs. Mozilla aims to build up a database of the worst offenders – and make the data available to privacy campaigners. ‘When we launch the full version of Collusion, it will allow you to opt-in to sharing your anonymous data in a global database of web tracker data,’ says the company. ‘We’ll combine all that information and make it available to help researchers, journalists, and others analyze and explain how data is tracked on the web. Google ignored an international outcry to launch its new privacy policy this week – despite concerns the policy may actually be illegal in many territories.

Vivian Reding, the European Commissioner for Justice, Fundamental Rights and Citizenship said, ‘Any company which wants to utilise the European market of 500 million citizens – which we’ve made borderless, a golden opportunity – then the European rules apply. Citizens should have the possibility of buying into more extensive use of their data – but that should be their freedom to choose, not done by a sneaking way of taking the freedom away from the citizens.'”

– beforeitsnews.com/story/1844/273
•
Mozilla Firefox, free web browser, is created by a global non-profit dedicated
to putting individuals in control and shaping the future of the web for the public good.
Firefox, for all platforms and in 70 languages, may be downloaded here:
www.mozilla.org/en-US/firefox/all.html
The “Collusion” add-on may be installed here:
addons.mozilla.org/en-US/firefox/