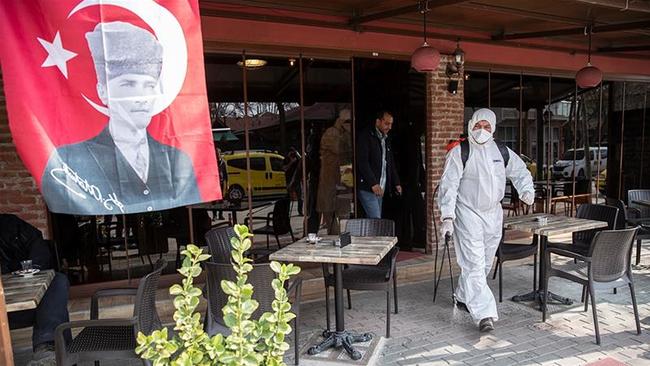 Turkey has established a well-known pattern of shutting down entire social media platforms — like Facebook and Twitter — the moment there’s a crisis in the country which could make Erdogan’s decision-making look bad or come under intense public scrutiny.

Recent events related to Syria, or Turkey’s war on the Kurds, are prime examples which have seen either Twitter blocked inside Turkey, or in some cases internet access to non-state sources temporarily halted altogether.

Press freedoms in Turkey are already ranked among the world’s lowest, with hundreds if not possibly thousands of journalists locked up across the country. But now citizens need to worry about potential arrest should they post coronavirus-related information that runs afoul of Ankara’s official narrative.

“We have found 242 suspects making baseless and provocative coronavirus posts on social media, and 64 have been detained,” the ministry announced on Twitter Thursday, according to AFP.

Similar to other countries in the region, Turkey has recently enacted a nation-wide bad on public gatherings, shuttering everything from schools to cafes to universities. This as at least 359 Covid-19 cases have been confirmed, including four deaths.

But also similar to other regional countries, Turkey has been accused of downplaying and/or covering up the true levels of the outbreak. Syria to the south has been a prime example of this: the Assad government has ordered the closure of all schools, restaurants, theaters and public places, and yet is still officially reporting zero cases. However, it could also be the case they acted quickly enough, with WHO officials looking on and administering tests, amid all but the Lebanese border being for years shutdown due to war.

Lest anyone think Turkey will be the the only country to began actual legal investigations over citizens’ social media posts related to the pandemic, governments across the globe, especially Israel for example, are fast giving themselves sweeping emergency powers which will likely end in severe online censorship. By the end of this, the locking up of journalists is likely to include other countries as well, possibly in the West, unfortunately.