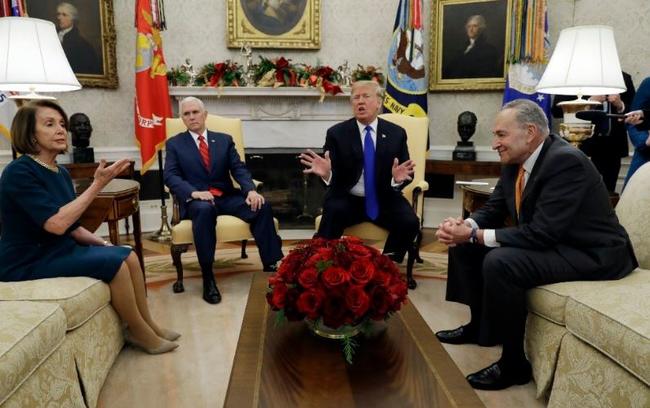 “Elections have consequences, Mr. President,” Schumer said. Trump replies: “That’s right. And that’s why the country is doing so well.”

In what was perhaps the most entertaining White House press briefing since President Trump’s now-infamous battlewith CNN’s Jim Acosta, an impromptu public meeting with Democratic leaders Chuck Schumer and Nancy Pelosi swiftly devolved into bitter sniping about Trump’s demands for border-wall funding that ended with Trump saying he would “happily” take responsibility for another government shutdown if his demands aren’t met.

Trump was supposed to hold a private meeting with the two Dems, but it surprised them by inviting in cameras at the start of the meeting, according to the Hill.

Trump continued to discuss the vote count despite pleas from Pelosi not to discuss his funding demands in front of the press. When he threatened to shut down the government over the border wall funding, Pelosi shot back: “You will not win”.

The bitter attacks – which resulted in a surreal, if supremely entertaining back-and-forth – quickly moved from the wall to bickering over whether Trump still had a mandate to push through his hard line border security measures following the results of the midterms.

Trump shot back: “That’s right. And that’s why the country is doing so well.”

Schumer also accused Trump of lying about how much of the wall has already been built, citing a “four Pinnochio” rating on Trump’s claims from the Washington Post.

When Schumer claimed that a wall “doesn’t solve the problem” of border security, Trump incredulously responded “it totally solves the problem” before embarking on a rant that touched on how crossings had fallen near San Diego thanks to a reinforced wall, as well as the success Israel has had with its walls separating Israeli territory from Palestinian-occupied territory.

The acrimonious debate ended with Trump declaring he’d be proud to shut down the government.

“I am proud to shut down the government for border security Chuck because the people of this country…don’t want criminals pouring into our country. I will take the blame for it because last time you shut it down it didn’t work.”

Markets moved lower as headlines from the meeting hit the tape, as traders probably watched in disbelief over how Trump’s era of “bipartisan good feeling” had gone so horribly awry – something that does not bode well for a functional federal government. One talking head on CNBC pointed out the irony in the fact that the fighting over $5 billion in funding for the wall helped erase some $75 billion in market cap.

Dems had intended to broach a counteroffer of $1.3 billion for border security, but as the debate intensified, the Dems clearly abandoned any pretense of clinging to their agenda for the meeting. 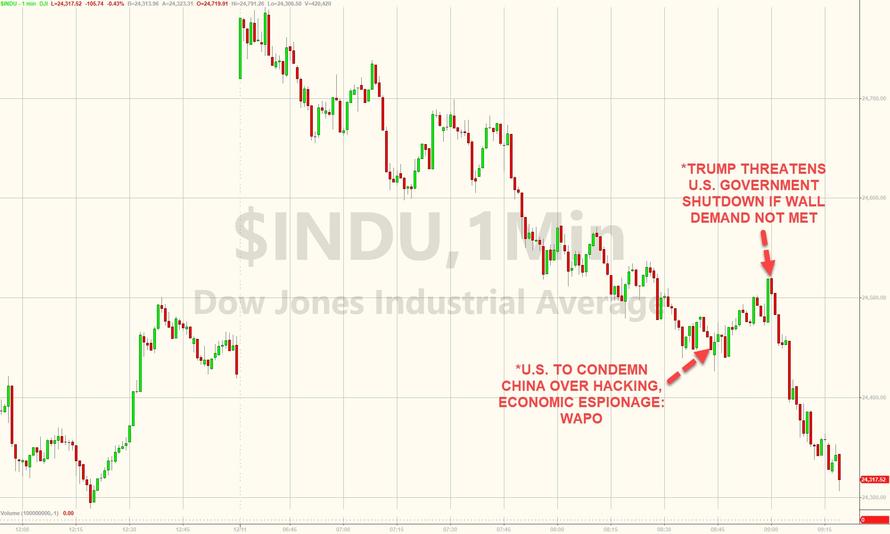 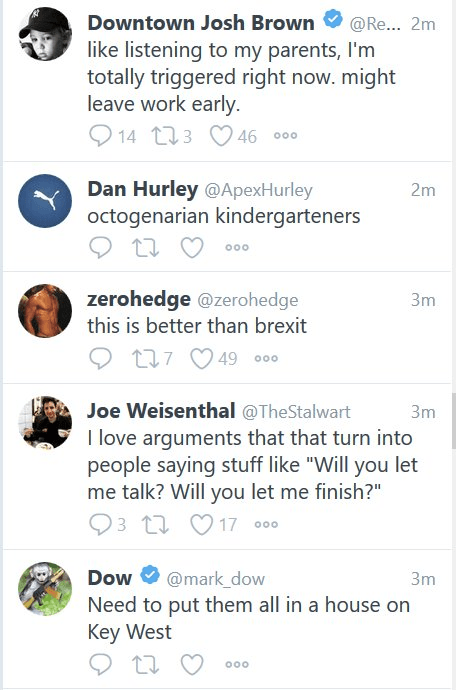 Watch what amounted to 17 minutes of pure insanity below: