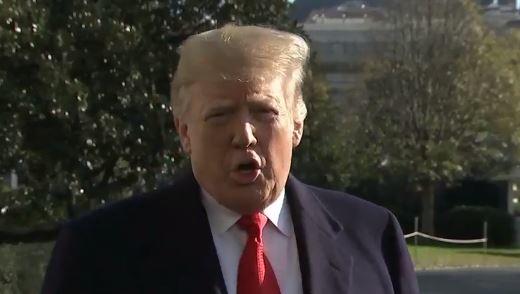 “He’s a weak person, and what he’s trying to do is get a reduced sentence.”

In the statement, Giuliani claimed it isn’t a coincidence that Mueller has taken another action on the same day that President Trump was leaving for an important meeting with world leaders. He previously unsealed indictments against 12 alleged Russian Intel officers just as Trump was leaving for Helsinki to meet with Putin.

NEW – Trump lawyer Rudy Giuliani in statement: “It’s no surprise that Cohen lied to Congress. He’s a proven liar who is doing everything he can to get out of a long-term prison sentence for serious crimes of bank and tax fraud that had nothing to do with the Trump Organization.”

Just hours before President Trump was slated to board Air Force One for a 10-hour flight to Argentina for this weekend’s G-20 conference, the president has decided to address the guilty plea entered by his former personal attorney, Michael Cohen, at a federal court house in Manhattan this morning.

In response to questions from reporters on the south lawn of the White House, Trump accused Cohen of lying to avoid jail time and said he doesn’t know when he decided to drop the Trump Tower Moscow project that is at the center of the allegations in Cohen’s guilty plea.

Trump also accused his former fixer of being a “weak person.”

Cohen’s guilty plea raises questions about Trump’s statements regarding his business dealings in Russia during the campaign. In the days leading up to the plea, Trump has stepped up his attacks on the Mueller probe, accusing it of being a McCarthyist witch hunt that’s wasting taxpayer money. 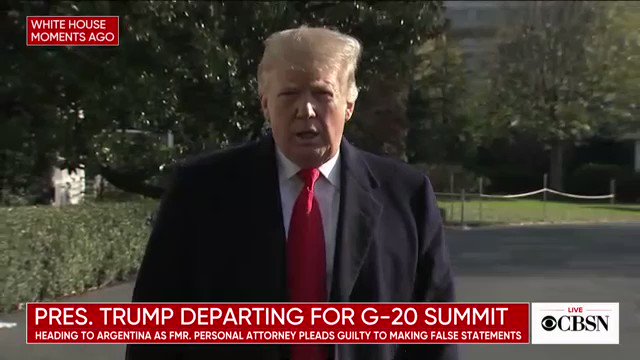 Trump said he considered the project for a short time but ultimately decided not to do it – though he insisted that there would have been nothing wrong if he did decide to do it. Trump said he abandoned the project because he wanted to focus on his campaign.

“I didn’t do the project – I decided not to do it. Michael Cohen what he is doing is he was convicted I guess – you’ll have to put it into legal terms – on things totally unrelated to the Trump organization on things related to mortgages – on things unrelated to us.

“he’s a weak person and by being weak what he’s trying to do is get a reduced sentence. He’s lying about a project that everybody knew about. i decided ultimately not to do it but if I did do it there would be nothing wrong.”

Trump added that Fox news reported on the Trump Tower Moscow deal back in January and that “everybody knew about it.”

“I was focused on running for president I wanted that to be my primary focus not building a building.”

In response to a question from a reporter, Trump said he’s “close to doing something with China” before ending the press conference and boarding a helicopter for Andrews Air Force Base, where he’s expected to depart for Argentina.