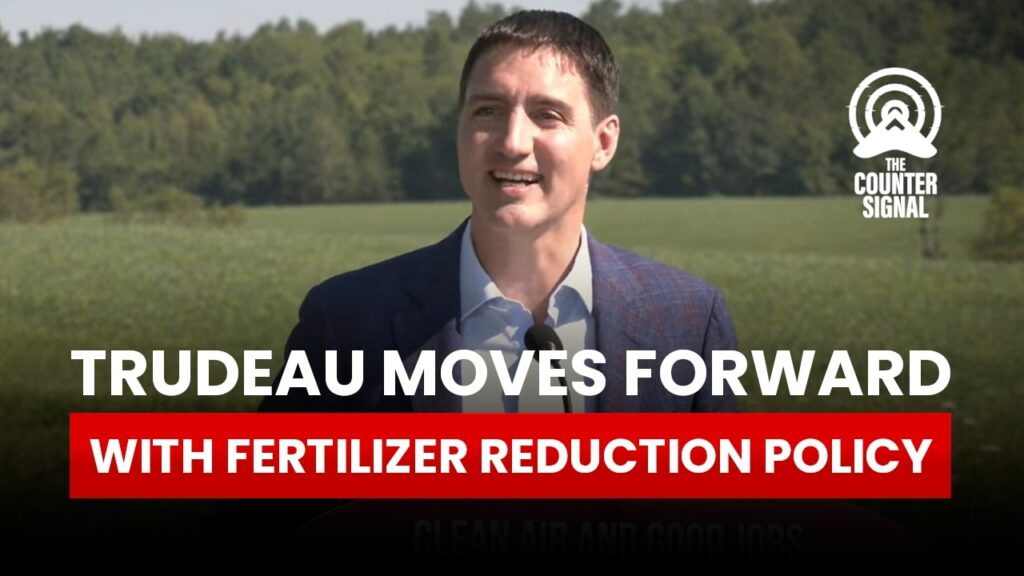 What will happen next?

QUOTE
Trudeau has decided to move forward with his cap on nitrogen emissions by reducing fertilizer use even as provincial Agriculture Ministers beg him to stop.

“We’re really concerned with this arbitrary goal,” Saskatchewan Minister of Agriculture David Marit said. “The Trudeau government has apparently moved on from their attack on the oil and gas industry and set their sights on Saskatchewan farmers.”

“This has been the most expensive crop anyone has put in, following a very difficult year on the prairies,” Alberta Minister of Agriculture Nate Horner said. “The world is looking for Canada to increase production and be a solution to global food shortages. The Federal government needs to display that they understand this. They owe it to our producers.”

As previously reported by The Counter Signal, in December 2020, the Trudeau government unveiled their new climate plan, with a focus on reducing nitrous oxide emissions from fertilizer by 30% below 2020 levels by 2030. That plan is now coming into effect — though the government refuses to acknowledge that nitrous oxide emissions can be reduced without reducing fertilizer use.
END QUOTE  https://thecountersignal.com/trudeau-moves-forward-with-fertilizer-reduction-climate-policy/

Read about his plan here: https://t.co/hpFUfjkVJ8

This was THIS was one of the direct causes of Sri Lanka’s total collapse.

“Agriculture is built not just on science, but it’s built on decades and centuries of trial and error and hard won experience,” said Earle. “There’s a certain degree of know-how in markets and in certain areas where the government should defer to the expertise of people in markets, people who are practitioners, rather than letting bureaucrats rule.”

Earle’s comments accorded with those of Breakthrough Institute founder and leading climate policy thinker Ted Nordhaus, who argued that synthetic fertilizers represent the most “economically and environmentally efficient” way to sustain Sri Lanka’s demanding agricultural sector in an essay from March.

The UN Office for the Coordination of Humanitarian Affairs estimated in the report that crop production for the 2021-2022 season decreased by 40% to 50%, and so far farmers have only utilized a quarter of the available land for the upcoming season, according to a report dated June 9.

Environment Minister Mahinda Amaweera declared a government initiative to save the earth from “our own geoengineering misuse, greed and selfishness” in 2020 ahead of a forum on halving nitrogen waste. The move was part of Sri Lanka’s effort to pursue environmental, social and governance (ESG) goals; the country signed onto a green finance taxonomy with the International Finance Corporation in May that included a commitment to organic fertilizers.

“If you want to go organic you have to cut down more forests to have enough production, because fertilizer use enhances crop production,” Vijay Jayaraj, a research associate at the Co2 Coalition, explained to TheDCNF. “And if you’re cutting down fertilizers, then it means that you need more land to produce enough crops to even meet the domestic demand.” Source