The Opinions and views expressed in the following post is those of their respective authors. The Administration of TheWatchTowers.com does not endorse or support any views on this post.

THIS IS IT get ready U.S. Troops in Fort Hood Receive Orders to deploy to Syria,.. so Foreign Troops Can INVADE AMERICA.Russian Defectors Have Warned the US About This Moment

Venture capitalist Dan Bubalo claims he was told by a source close to Ft. Hood that US troops have been ordered to deploy to Syria.

Russian Troops To Target Terrorists in America As Part of Drill Russia Is Preparing To Attack America

United States has not been attacked on the home front for 200 years dating back to the War of 1812. There exists a plethora of confirming information to support the fact that America’s days may be numbered and that we are totally unprepared for what is coming.

Russia, through the traitorous cooperation and complicity of President Obama, is positioning its assets in order to attack Alaska.  Before I piece together the many elements of the planned Russian “surprise attack”, it is important for America to understand that it takes a communist to bring communism to America. Obama was bred by communists, raised by communists, educated at the finest schools with communist money, his political career was launched by communists and his controllers in the White House are communists. Part one of this series will clearly establish the fact that Obama is the lynchpin of a multigenerational plan to hand America over to the Russians and to the Chinese communists.

Obama did not just wake up one day and decide to weaken American defenses and hand over the country to the Russian communists. Obama was groomed for this position for the past several years. He is indeed the right communist, at the right time,  whose mission is to bring America the most crippling form of communism the world has ever seen.

Russian Defectors Have Warned the US About This Moment

High-profile Soviet defectors have been telling American intelligence agencies for decades that the Russians have engaged in a multigenerational plot to destabilize America prior to the takeover in which both the Russians and the Chinese will unleash a ferocious military assault upon our country. 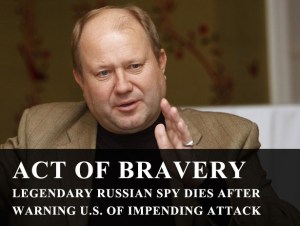 The high-ranking defector, Sergei Tretyakov, who repeatedly warnedAmericans that Russia’s core government had never abandoned the Cold War and still aimed to destroy the United States. In his later years, he said his main goal was to “wake up” the American people to the deadly threat posed to them by the former Soviet Union. His death was reported as a cardiac event, however, his family remains suspicious. Tretyakov joined a plethora of others who defected from the former Soviet Union in order to warn the American people about a planned attack sponsored by the Russian government with assistance from within the American government.

Former Soviet defector, Yuri Bezmenov, a well renowned media/propaganda expert defected to the United States. in 1970, and subsequently exposed the KGB’s subversive tactics against American society. Yuri Bezmenov has conducted a number of interviews in which he explains how Marxist ideology is deconstructing America’s values by controlling the media and which would ultimately serve to demoralize the country, destabilize the economy, and provoke crises in order to Sovietize the United States.   Bezmenov is well known for revealing Russia’s doctrine of “ideological subversion”, a slow, long-term multi-decade process of media-based brainwashing in which the sole purpose is to confuse, confound, and destroy the moral base of America. Can anyone argue that our country’s values represent a debasement of our national sense of morality? Every perversion known to mankind in now honored in our media. Christians are out and hedonists are in. Loyal husbands and fathers are out and a philandering lifestyle is a honored “virtue.” On this point, the Russians have won. full story

[This article was written by Alexander Litvinenko four months before his assassination.]

albert pikes letter to mazzini about the the world wars extract

The Third World War must be fomented by taking advantage of the differences caused by the “agentur” of the “Illuminati” between the political Zionists and the leaders of Islamic World. The war must be conducted in such a way that Islam (the Moslem Arabic World) and political Zionism (the State of Israel) mutually destroy each other. Meanwhile the other nations, once more divided on this issue will be constrained to fight to the point of complete physical, moral, spiritual and economical exhaustion…We shall unleash the Nihilists and the atheists, and we shall provoke a formidable social cataclysm which in all its horror will show clearly to the nations the effect of absolute atheism, origin of savagery and of the most bloody turmoil. Then everywhere, the citizens, obliged to defend themselves against the world minority of revolutionaries, will exterminate those destroyers of civilization, and the multitude, disillusioned with Christianity, whose deistic spirits will from that moment be without compass or direction, anxious for an ideal, but without knowing where to render its adoration, will receive the true light through the universal manifestation of the pure doctrine of Lucifer, brought finally out in the public view. This manifestation will result from the general reactionary movement which will follow the destruction of Christianity and atheism, both conquered and exterminated at the same time.”