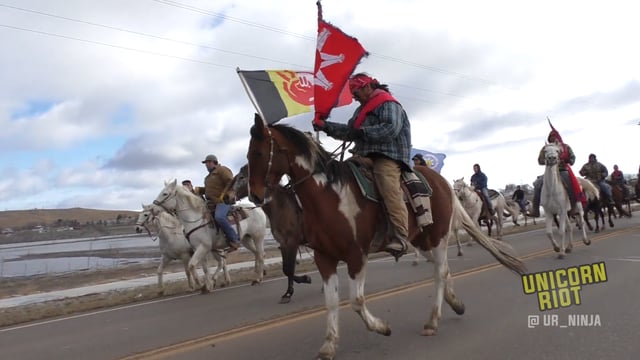 No mainstream media will cover this! There are many indigenous Nations

The Standing Rock Sioux remain unmoved in North Dakota this week as they blocked construction crews attempting to work on the Dakota Access Pipeline, which would transport crude oil across North and South Dakota, Iowa and Illinois. The pipeline poses a threat to the natural environment and native water sources of the local people. More than a dozen protesters were arrested on charges of disorderly conduct and trespassing out of the boundaries set by law enforcement.

Among those arrested include tribal officials like Standing Rock Chairman Dave Archambault, who is a long time fighter for tribal sovereignty. Their arrests came after construction workers dug up human remains on a sacred cultural site, and the leaders crossed the fence in outrage. This sparked more anger among protesters as they blocked the roads and began chants and war cries, which can be viewed here.

“We want to hold them back until we can get to court,” said tribal historian, LaDonna Brave Bull Allard to the Washington Times. The Standing Rock Sioux await trial after suing the Army Corps of Engineers last month for their approval of the pipeline, neglecting the obvious violations of historical preservation, environmental safety and tribal sovereignty.

Meanwhile the pipeline developers, Energy Transfer, persist in their ignorance to continue construction regardless of protest, while insisting that they care for the safety of their employees and those who live in the area.

“To that end, we will press charges against anyone who interferes in the construction of the pipeline. Construction on the Dakota Access Pipeline will continue across all four states along the route,” Energy Transfer said in an emailed statement to the Bismarck Tribune.

If they truly cared about safety, they wouldn’t be building a pipeline which has a high likelihood of leaking and contaminating the environment, especially when it is proposed to be built over the Cannonball and Missouri Rivers, which are vital water sources for the Standing Rock Sioux tribe. North Dakota’s oil industry already has a massive history of leaks and spills with 8,690 reported between 2006 and 2014, including 2,390 that were not contained. With how frequently leaks and spills happen, it does little to convince that Dakota Access will be any different from all the other pipelines, especially with Native American lives at stake if Dakota Access is built.

Energy Transfer has clearly disregarded tribal sovereignty and historical preservation by going around the tribe for the sake of profit. They didn’t even so much as ask anyone at Standing Rock for permission to build the pipeline over their water sources and their sacred land. Their blatant ignorance to the Standing Rock Sioux’s concerns shows how little they really care, and will do anything in their power to continue construction, to the point of desecrating human remains and ancestral burial sites .

Tribal members and allies have prepared for this moment for years. In April, #NoDAPL camp began w/ ride by horseback

BREAKING: Reports coming in that #NoDAPL protesters are being served w/ papers related to federal restraining order, even out of state.

People are not backing down. The fight to stop the Dakota Access Pipeline is growing #NoDAPL

No mainstream media will cover this! There are many indigenous Nations