OSIRIS-REx is a NASA mission which was launched a year ago to sample near earth asteroid Bennu, and send that sample back to return it to earth in 2023. It should be noted that Bennu has a slim 1 in 2700 chance of hitting earth sometime in the late 22nd century, but due to its significant size of about 490 meters diameter this ranks it as the third greatest asteroid threat on the near earth asteroid threat list by NASA. https://cneos.jpl.nasa.gov/sentry/

OSIRIS is currently approaching earth for a gravity assist on its way to the asteroid. It’s currently about 600,000 km from earth (the average distance of the moon is about 384,400 km), but tonight it will pass between the earth and moon for its close approach tomorrow. I’ll be tracking it tonight using my telescope, if the weather allows, using my custom TeleTrak software.

It’s already visible to large telescopes even though it’s at 1.5 times the distance to the moon, which is pretty remarkable when you consider that it’s no bigger than a large car or SUV (granted the solar arrays are folded up in this picture): 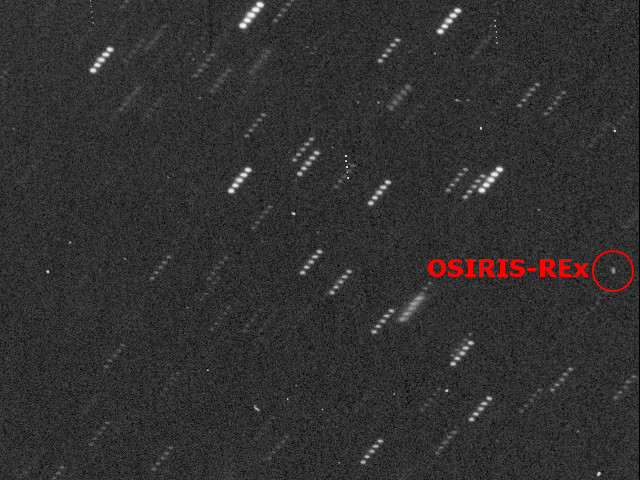 Alive webcast tracking OSIRIS-REx starting around 12:30 AM eastern time, 04:30 UT, depending on weather. The forecast calls for clearing skies after midnight, so we’ll just play the exact start time by ear.