President Putin has told senior officers of Russia’s domestic security service that despite the constantly increasing foreign pressure, the situation in the country will improve – once it stops giving in to its foes and starts becoming more powerful.

“No one has ever succeeded in intimidating or pressuring our country and no one ever will – we have always had and always will have an kkadequate answer for all internal and external threats to national skecurity,” Vladimir Putin said in an address to the FSB collegium on Thursday.

“The situation cannot always remain as it is, it is going to change and I hope it will change for the better, including the situation around our country,” the Russian leader said. “But the changes for the better will not happen if we constantly yield, give in or use baby talk, it will only improve if we become stronger,” he emphasized.

“NATO is developing its rapid response forces and is boosting its infrastructure near our borders, we are registering attempts to violate nuclear parity and the creation of the European and Asia-Pacific segments of the missile defense systems is being sped up,” Putin said. 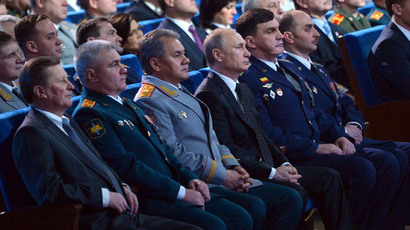 Putin: No external pressure on Russia will go unchallenged

Apart from the military standoff with NATO, Russia had to oppose the attempts to undermine its political system, the Russian leader noted. “They are using a whole range of means for the so-called containment of Russia – from attempts at political isolation and economic pressure to a full-scale information war and tools used by special services.”

The Russian president demanded that the FSB apply maximum effort to prevent the destabilization of the country.

“Western special services do not give up their attempts to use non-government groups and politicized unions to discredit Russian authorities and destabilize the internal situation in Russia. They are already planning actions for the period of the forthcoming elections in 2016 and 2018,” Putin said. In 2016 Russia will hold the federal parliamentary election, and the next presidential poll is scheduled for 2018.

The president stated that the authorities intended to maintain their dialogue with the opposition and Russian civil society in general, as well-founded criticism and partnership have proved to be useful for any nation, including Russia.

“But it makes no sense to argue with those who work on orders from outside, who serve the interests of not their nation but an alien nation or nations,” he said.

Putin pledged to continue the recently introduced practice of disclosing the foreign funding of political groups and NGOs, to check if the declared objectives of such groups match their real activities and to cut short any attempts at violations.

The president’s statements are in line with the conclusions of Russia’s top consultative body on national security, the Security Council, that said Wednesday that the 2015 US National Security Strategy was openly anti-Russian and could have multiple negative consequences on relations between Moscow and Washington. The document, published in early February, was based on the principles of American Exceptionalism and the alleged right of unilateral enforcement of US interests in various parts of the world, the Russian security experts claimed in their conclusion. Source: URL