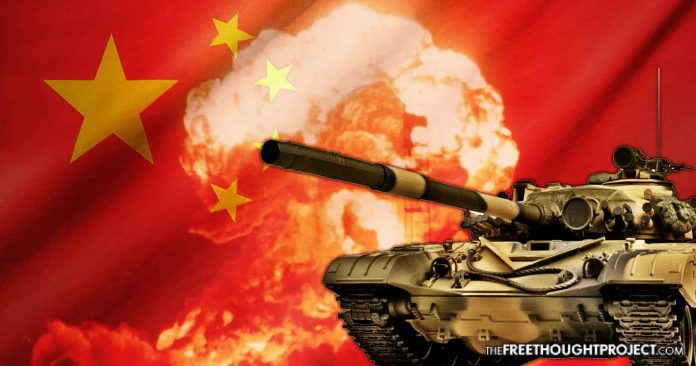 Beijing, China – Revealing the extreme direness of the situation on the Korean Peninsula, a state-run Chinese media outlet based in a province bordering North Korea and Russia — the Jilin Daily — published a “common sense” guide for surviving a nuclear war, according to Reuters.

Although the full-page article of guidelines doesn’t specifically mention North Korea, the warning was clearly a result of the increasing tensions between a nuclear-armed DPRK, and the United States.

The influential Chinese state-run Global Times described the article as a public service announcement due to the situation on the Korean peninsula.

“If war breaks out, it is not possible to rule out the Korean peninsula producing nuclear contaminants, and countermeasures must be seriously researched and spoken openly about to let the common folk know. But at the same time, there is absolutely no reason to be alarmed,” the Global Times said.

Tensions with the U.S. have increased dramatically since North Korea conducted its sixth nuclear test in September. Just weeks ago, the DPRK launched a Hwasong-15 intercontinental ballistic missile (ICBM), which demonstrated a theoretical capability to conduct a nuclear strike anywhere across the whole of the U.S. mainland.

Citizens in Jilin have reported feeling tremors when the North tested a nuclear device, according to The Daily Caller.

“It’s natural that Jilin province is more sensitive to the situation on the Korean peninsula, given its special geographic location. It’s necessary for the provincial paper to publish information on nuclear weapons,” the Global Times wrote in a Chinese-language editorial.

The Jilin Daily encouraged people caught outside when the bomb goes off to dive into a ditch, river, or lake and cover any exposed skin.

According to a report by Reuters, the Jilin Daily guidelines noted that:

People who find themselves outside during a nuclear attack should try to lie in a ditch, cover exposed skin in light colored clothing or dive into a river or lake to try and minimize the possibility of instantaneous death, it said.

Cartoon illustrations of ways to dispel radioactive contamination were also provided, such as using water to wash off shoes and using cotton buds to clean ears, as well as a picture of a vomiting child to show how medical help can be sought to speed the expulsion of radiation through stomach pumping and induced urination.

For those who can get to shelter, the paper urges people to close their doors and windows and seek cover under beds and tables, according to the Daily Caller.

Revealing the quasi-official nature of the warning, the guidelines were published at the request of Jilin Provincial People’s Air Defense Office to strengthen “national defense education,” according to The Washington Post.

China is not the only state in Southeast Asia to issue guidelines for surviving a nuclear attack, as both Japan and South Korea have carried out emergency exercises and issued similar guidelines.

Adding credibility to the increasing likelihood of a nuclear exchange, leaked documents from a Chinese telecommunications company hint that Beijing is anticipating an influx of war refugees, according to Defense One.

The leaked documents reveal the Chinese government is preparing for a flood of refugees from North Korea if war breaks out on the Korean Peninsula, according to a document obtained by Radio Free Asia.

READ MORE:  Putin Issues Warning To The World: North Korea “On The Verge Of A Large-Scale Conflict”

According to a report from Defense One:

When Huang and Lin asked officials with China Mobile and the local government about the document, they denied that the work was related to the construction of refugee camps. But the RFAreporters wrote in a subsequent Dec. 7 report that they had confirmed the plan’s existence.

Four days later, a China Mobile spokesman appeared to confirm the reports. Contacted by The Express, a UK-based newspaper, the spokesman said, “The government has ordered these settlement points. But don’t worry, no one is panicking here.”

And there you have it.

Although officially — “no one is panicking” — simultaneously preparing for a nuclear attack and flood of refugees says otherwise.

The Chinese government has previously said that they reject military intervention, but in the event that the U.S. launches a preemptive strike on North Korea – the Chinese military WILL intervene in defense of the North.

Make no mistake that the world is teetering on the brink of an extreme nuclear catastrophe.