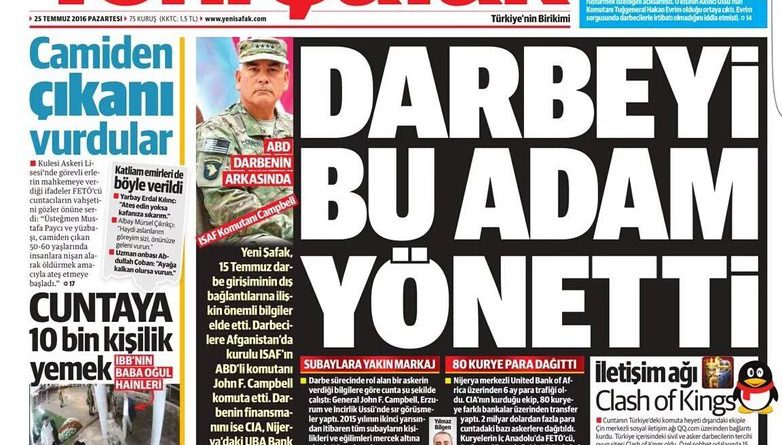 Over five thousand joined anti-American demonstrations yelling “death to US” and demanding an immediate closure of the Incirlik Air Base for over five hours on Thursday before Turkish police came in and broke up the protesters before they could arrive at major NATO military facility, home to nearly 90 US tactical nuclear weapons.

On Thursday, a group of protesters swelled into several thousand ardent anti-American demonstrators heading towards the NATO Air Base at Incirlik, where they look to demand US forces immediately leave the country. Nationalists in Turkey have been emboldened since the failed coup attempt against Turkish President Recep Tayyip Erdogan, with the country’s Labor Minister telling HaberTurk news that Washington was behind the coup attempt and with Prime Minister Binali Yildirim threatening all-out war against the United States.

A critical turning point may have been the massive fire that broke out near the Izmir Air Base this weekend, with T24 news reporting that officials suspected that the cause was anti-American sabotage. The blaze came hours after President Erdogan’s leading Islamist newspaper, Yeni Safak, printed the image of the NATO International Security Assistance Force Commander, US Army General John Campbell, as a leading force behind the coup along with Fethullah Gulen.

BREAKING: 1000s chanting “death to #US, death to #Israel” before US military airbase in #incirik #Turkey pic.twitter.com/6caHsA2Vni

A recent poll conducted just before the failed coup attempt found that only 17% of Turks welcomed the United States in the country and anti-American sentiment in Turkey has only grown as the US refuses to extradite the alleged coup mastermind, Fethullah Gulen, with US officials citing US law that requires a certain evidentiary standard be met before conducting such proceedings — evidence that they say Ankara has failed to provide.

As the protest march continues to grow in size, the potential exists that protesters may ultimately clash with NATO forces.

LIVE: crowd gathers before #US mil. base in #incirlik #Turkey protesting against supposed US link to coup attempt https://t.co/sV8fPeuvHB

The US State Department issued a warning to US personnel serving in or near Incirlik Air Base and cautioned that the American Consulate in Adana will close promptly at 4pm to avoid conflicts with demonstrators.

@TravelGov I wonder who they are mad at and why?

An additional warning been issued for Americans traveling to Turkey that a massive anti-American protest is also scheduled to take place in Ankara at 5:30pm and that US citizens should “be aware.”

In #Turkey? Be aware of demonstration expected 5:30pm today at Ankara Chamber of Industry Building (ASO) on Ataturk Boulevard in Ankara.

Local reporters indicate that police have been deployed to block the entrance of the protesters who are chanting against the United States, Israel and calling for the immediate shutdown of Incirlik Air Base with some demonstrators saying that they are using the base to kill their “brothers” throughout the Middle East.

A large convoy of vehicles are in line with the thousands of protesters which threatens to great complicate the already tenuous security situation near the critical NATO base.

BREAKING Large convoy of cars w 1000s of Turkish protestors heading to US largest army base in Turkey Incirlik pic.twitter.com/JZNzivMWhw

The protests were broken up after they began nearly five hours earlier with police first blocking the roadways heading to the Incirlik airbase and then subsequently demanding that demonstrators disband.

No problem at the protests at #Incirlik Base in #Adana
Protest rally finishedhttps://t.co/5tfofy7caqhttps://t.co/mgb7yJeVCT