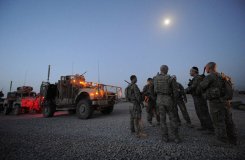 WASHINGTON (AFP) – US President Barack Obama will lay out the size of his planned drawdown of US troops in Afghanistan on Wednesday, in an announcement likely to map out an endgame for a bloody and costly 10-year war.

“The Afghanistan speech will be on Wednesday,” a US official said on condition of anonymity, as Obama moved close to a final decision on the scope and size of withdrawals due to start in July.

A second official also confirmed that Obama would reveal his intentions on Wednesday, after weeks of consultations with top security and diplomatic aides on progress in the war and the future size of the US force.