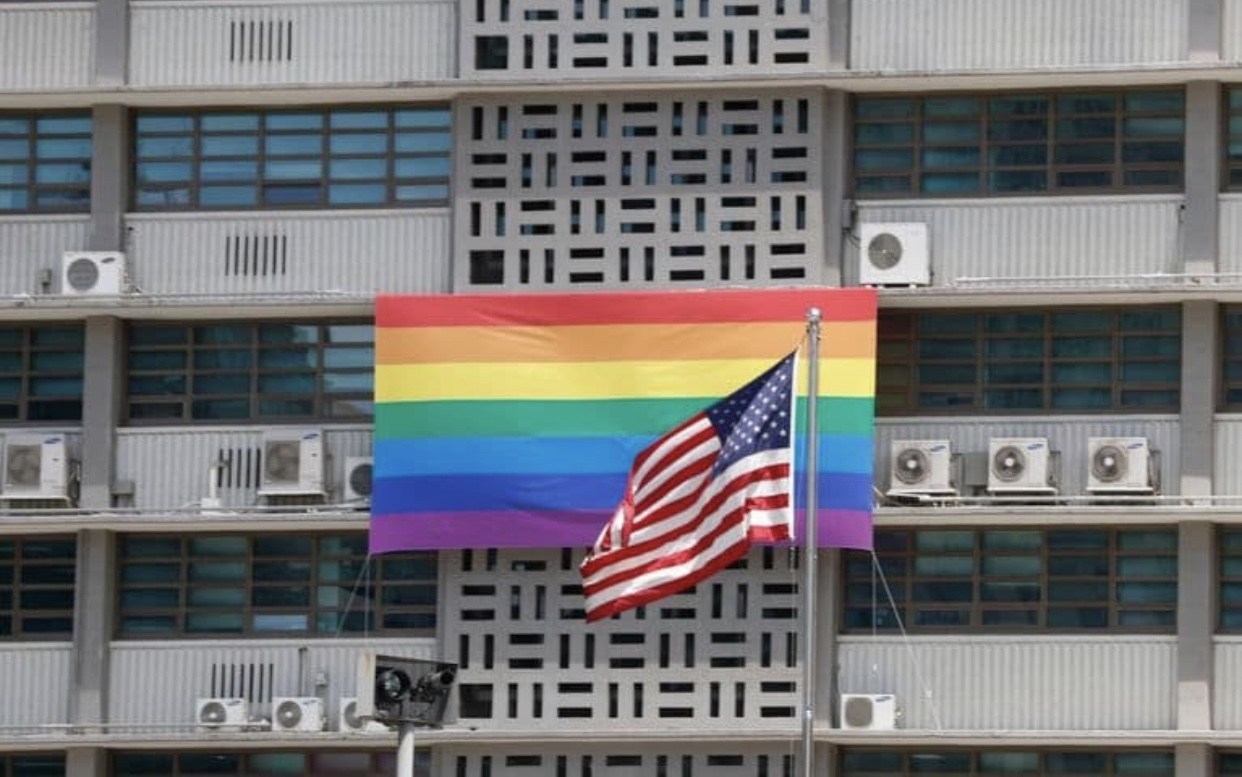 Source: “This Is A Category One Insurrection”: Some U.S. Embassies Defy State Department’s Ban on Flying Rainbow Flags

Since the State Department began rejecting all embassy requests to hoist rainbow flags outside the mission buildings during LGBTQ Pride Month this year, some U.S. diplomats have been finding ways to defy, or at least get around, the new policy.

The facades of the U.S. missions in Seoul and Chennai, India, are partially hidden behind large rainbow flags, while the embassy in New Delhi is aglow in rainbow colored lights. The website for the embassy in Santiago, Chile,shows a video of the chief diplomat raising a rainbow flag last month for the International Day Against Homophobia, Transphobia and Biphobia.

The Vienna embassy’s website features a photo of a rainbow flag flying below Old Glory on a mast jutting from the building, a statement by Diplomats for Equality and a story about a professor lecturing on the visibility and growth of LGBT rights.

U.S. diplomats in Jerusalem joined a March for Pride and Tolerance, and several ambassadors have tweeted photos of themselves in local Pride parades or standing outside the embassies surrounded by employees holding up letters spelling PRIDE.

“This is a category one insurrection,” said one diplomat, who like others interviewed about the sentiment over the rejections, which were not made in writing, spoke on the condition of anonymity for fear of being fired.

The flap over the flags started when the State Department did not send out an official cable this year with guidelines for marking Pride Month, as it has in years past. In 2011, the Obama administration directed agencies involved with foreign policy to promote LGBT rights, a striking policy for an agency that, up to the early 1990s, considered homosexuality a security risk and cause for termination.

The Obama administration’s Pride Month guidelines included rules for flying rainbow flags from poles outside embassies — they had to be smaller than the American flag and fly beneath it. But permission was granted with no fuss. By 2016, approvals were left up to each ambassador or chief of mission.

That process changed last year, after Mike Pompeo became secretary of state. An evangelical Christian who believes marriage should be defined as between a man and woman, Pompeo has said gay employees will be respected and treated like everyone else. But he has downplayed some symbols of LGBT rights, while introducing several new panels and envoys specializing in religious freedom issues.

[Editor’s Note: This article was written by Carol Morello and originally published at The Washington Post. Title changed by P&P.]