When Les and Amanda Anderson went to pick up their son from a county jail in St. Joseph, Michigan, it was the first time they had seen him in two and half months.

“I was thinking just coming up here it’s like he shouldn’t be here,” Les Anderson said. “This, you know, it shouldn’t be happening.”

Since his release last month, their son Zach Anderson’s freedom has been severely restricted because at just 19 years old, Zach is a convicted sex offender. 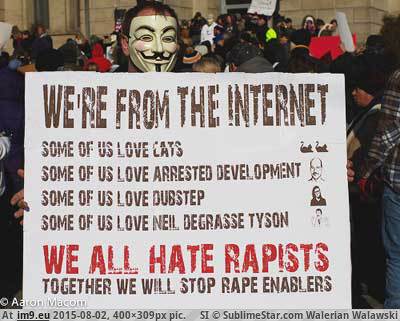 Zach was arrested last winter after having sex with a girl he met on the dating app “Hot or Not,” who claimed she was 17. But she admitted to police that was a lie. She was really 14.

If he had known she was so young, Zach said, he never would have met her.

As a convicted sex offender, the terms of Zach’s probation are incredibly strict. For the next five years, he is forbidden from owning a smart phone or using the Internet. He is not allowed to talk to anyone under age 17, other than immediate family. He is banned from going to any establishment that serves alcohol and he has to be home before 8 p.m. every night.

“They make me out to be a monster,” Zach said. “I can’t even look at life regularly.”

His parents say his punishment is cruel and unusual, and they are waging a very public fight, even setting up a Facebook page, hoping to rally support for their son.

Zach graduated high school just last year. Like many teens, he turned to his smart phone to find a date one night. He says he was on the dating app “Hot or Not” for about a week when he started talking to the 14-year-old.

“[She] was actually the first person I had met up with or anything from that,” Zach said. “I had asked her when we were messaging. I said, ‘How old are you?’ And then she had told me 17… I just got out of high school. So it’s two years difference. I didn’t think that was a big deal or anything.”

The then-14-year-old girl falsely registered on the “adults” section of the dating app. Zach said after they connected, they flirted through text messages and arranged to meet in her hometown of Niles, Michigan, 20 miles across the state line from Zach’s home in Indiana.