“The policy of restraining Russia continues, though it is high time to drop this policy and file it in the historical archives,” Lavrov told a media briefing in Moscow.

He agreed that relations between Moscow and the West would never be the same again.

“Our western colleagues say sometimes that there will be no more ‘business as usual’ with Russia – and I’m confident that statement is absolutely correct,” Lavrov said.

“There will be no more business as usual after they attempted to impose agreements on us respecting the interests of either the European Union or the US in the first place, trying to convince us that they will not damage our interests,” he said. “That’s over now.”

Moscow is ready for “close, constructive cooperation” with its western partners, yet solely and only on an equal and mutually beneficial basis, “without interference into each other’s internal affairs, with respect for the principal interests of each side,” Lavrov said.

Western countries are still trying to “accrue one-sided benefits” and even attempting “to punish us for conducting an independent international policy,”Lavrov said.
“Of course, we take that into account in our actions. But that’s not our choice.”

NATO’s build-up near Russia’s borders is shortsighted, the Russian foreign minister said, adding that Moscow would keep an eye on the concentration of military potential in neighboring countries.

“Now we see the counterproductive and dangerous policy in relations with Russia, including the build-up of NATO’s military potential near our borders and the creation of global European and Asian segments of a global US missile defense,” Lavrov said.

He added that Moscow considers such actions destabilizing and shortsighted.

Speaking on the conclusions of the public investigation regarding the death of the former FSB officer Litvinenko, who died of polonium poisoning in London in 2006, Lavrov called attention to the “gravest accusations brought against the Russian leadership without providing any evidence at all.”

Lavrov added that should “a savvy lawyer take up the case and analyze the facts and the statements made by the British policymakers, they could be held liable for libel.”

“We’re not interested in the EU getting weaker, leave alone the union splitting up. We are interested in a united and strong European Union, a comfortable partner on the economy and all other issues. But we cannot fail to see the current developments,” Lavrov went on, emphasizing the decisive role of Germany in maintaining EU’s unity.

Invasion of Europe: The ship is going down (Op-Edge by Sam Gerrans) https://t.co/nkC3ZKUfhu pic.twitter.com/Q7RxWAVERg 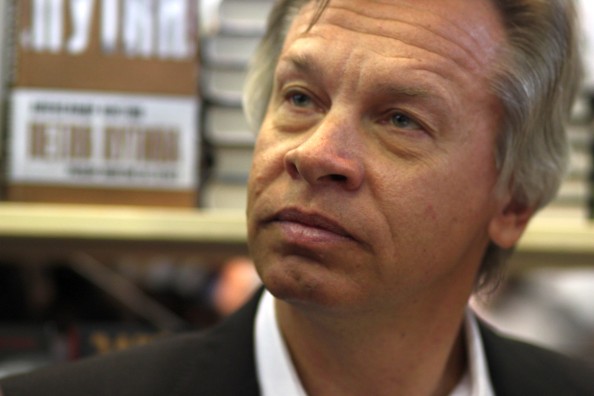 “Russia has done the unthinkable — become a great power filling the void left by other former great powers that have now shrunk in size, power and influence,” he states, adding that former great powers, such as Japan, Europe’s Germany, France, England, the now defunct Austro-Hungary and the US itself “are now no longer major powers.”
Russia lost faith in Western leadership due to abuse of its trust – Pushkov

\”In response to our readiness for interaction, we received the readiness of the West to strengthen their geopolitical positions at our expense as much as possible,\” Pushkov said.

He said the developments in the Middle and Near East led to the discrediting of Western countries.

\”The bad foreign policy decisions made by the West on a number of tracks led to high instability. The arch of instability that stretches from Northern Africa to Pakistan has turned into an arch of wars and terrorism, that is, the situation has deteriorated,\” the parliamentarian said.

Pushkov believes that Russia in this situation cannot support the Western approaches to the regulation of international relations because they have proven to be inappropriate.