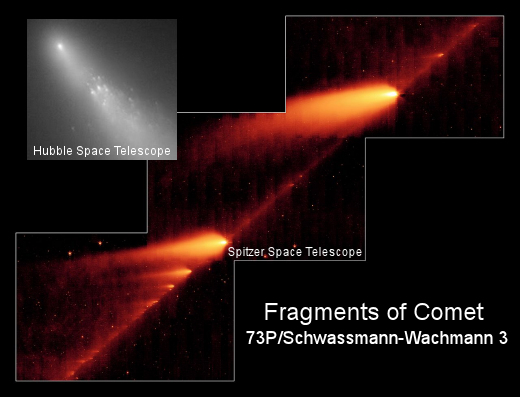 Multiple forecasters agree that a meteor shower could erupt on May 31, 2022, when Earth runs into one or more debris streams from Comet 73P. The display could be as intense as a meteor storm (1000 or more meteors per hour) or as weak as nothing at all. No one knows how much debris is inside the approaching streams, so meteor rates are hard to estimate.

Whatever happens, people in North America are in a good position to see it. Almost the entire continent will be in Moon-free darkness when the shower peaks. Maximum activity is expected around 1:00 am Eastern Daylight Time (05:00 UT) on Tuesday morning, May 31st. The shower’s radiant (the point from which all meteors stream) will be almost straight above Baja California.

This isn’t the first time Earth has sampled debris from Comet 73P. In 1930, at least a handful of meteors were observed shortly after the comet’s discovery by German astronomers. The meteors emerged from a radiant near 4th magnitude star tau Herculis, so the shower has since been called “the tau Herculid meteor shower.” NASA cameras also detected minor tau Herculid activity in 2011 and 2017.

Based on past performance, the tau Herculids seem unlikely to produce a good show. For nearly a century the shower has been a dud. The X-factor this year is fresh material from the comet’s catastrophic breakup. If the new meteoroids reach Earth–and that is a big IF–shooting stars will fly from a point near the bright star Arcturus in the constellation Bootes. Here is a sky map to help you find it.

To learn more about the tau Herculid meteor shower, we recommend this comprehensive paper by Joe Rao, a lecturer at the Hayden Planetarium in New York. Also, a new analysis by Jérémie Vaubaillon of the Institute for Celestial Mechanics and Computation of Ephemerides in Paris raises the possibility of two additional outbursts on May 31st resulting from debris shed by Comet 73P in the years 1892 and 1897.

It all adds up to a date with the night sky at the end of the month. Don’t miss it!