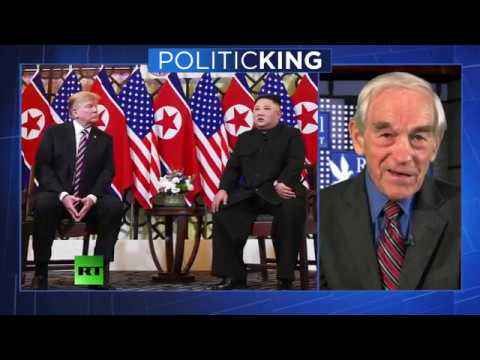 Ron Paul, the libertarian communicator who ran three times for president, has been neither a “never-Trumper” nor a loyalist of President Donald Trump. Instead, Paul, through the 2016 presidential campaign and Trump’s presidency, has judged Trump’s various comments and actions against Paul’s understanding of right and wrong.

In the wide-ranging interview, Paul, who King introduces as “always outspoken,” lives up to that description in providing clear criticism of Trump in regard to several matters. From increasing United States military spending to piling on new US government debt to continuing mass surveillance to seeking to build a wall at the US-Mexico border through the exercise of “national emergency” powers to keeping US troops in Syria, Paul declares Trump is following the wrong course.

Paul, however, is not entirely negative regarding Trump’s presidency. In the interview, Paul dismisses the accusation that Trump is “beholden to” Russia President Vladimir Putin. Paul also praises Trump for talking with leadership of the North Korea government, though Paul notes that the effort toward improving relations with North Korea appears to have recently been “sabotaged.”

Copyright © 2019 by RonPaul Institute. Permission to reprint in whole or in part is gladly granted, provided full credit and a live link are given.