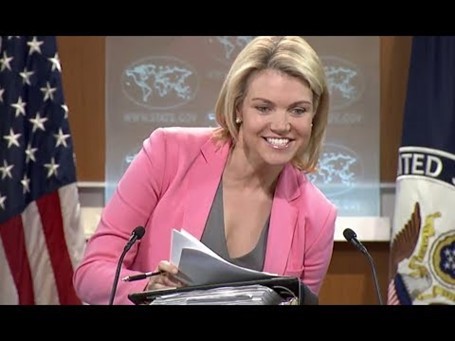 Source: The Ron Paul Institute for Peace and Prosperity : Nikki Haley To Be Replaced By Blonde Version Of Nikki Haley

When UN Ambassador Nikki Haley announced her upcoming resignation from the position, establishment loyalists spent the day awash with grief that the Trump administration was losing one of its remaining moderate Republican voices.

“Nikki Haley, ambassador to the United Nations, has resigned, leaving the administration with one less moderate Republican voice,” tweeted the New York Times, without defining what specifically is “moderate” about relentlessly pushing for war and starvation sanctions at every opportunity and adamantly defending the slaughter of unarmed Palestinian protesters with sniper fire.

“Too bad Nikki Haley has resigned,” tweeted law professor turned deranged Russia conspiracy theorist Laurence Tribe. “She was one of the last members of Trumplandia with even a smidgen of decency.”

Well I’ve got some good news for those who lamented the loss of a virulent psychopathic war whore as UN ambassador, and bad news for any anti-interventionist Trump voters who’ve been secretly hoping this administration would use Haley’s vacancy to move in a less hawkish direction: you’re getting another one just like her. According to multiplesources, Trump has confirmed early rumors and selected State Department Spokeswoman and former Fox News pundit Heather Nauert as Haley’s replacement.

Ever since rumors emerged of Nauert’s selection for the job last month, the dominant criticisms have been that she lacks “experience” and “qualifications” for the job of US Ambassador to the United Nations. These criticisms have picked up ever since these early rumors were confirmed, and they are illegitimate for two reasons. The first is that a position as Fox News propagandist is very much the sort of experience an American needs to be a UN Ambassador, especially for this administration. The second is that all the job requires is a willingness to sell one’s soul for the promotion of US war agendas, and to occasionally help kick Palestinian human rights further into the gutter than they already are. No experience is required for this, and these are things we already know Nauert could do in her sleep.

As State Department Spokeswoman, Nauert’s messaging has already been moving in lockstep with that of Haley anyway. She speaks about Syria as though it is the property of the United States, routinely warning the Syrian government not to re-take its own land from the western-backed terrorist factions that nearly overran the nation. She regularly promotes the unrest in Iran that the Trump administration has been deliberately attempting to foment with starvation sanctions and CIA covert ops, and helps sell the absolute lie that Iran is “the leading state sponsor of terrorism”. She promotes anti-Venezuela narratives, anti-Russia narratives, anti-North Korea narratives, anti-Houthi narratives, and anti-Palestinian narratives. She’s been at this job since April of last year, and her talking points have consistently mirrored Haley’s.

Nauert is perfectly qualified for the job of UN Ambassador, because all that job requires is being a sociopathic war pig. She’s already been doing that.

All this fuss about Nauert’s “experience” highlights perfectly why Trump’s ostensible opposition has been almost entirely worthless: they don’t focus on any of the evil foreign policy decisions that this administration is actually advancing, because they don’t actually oppose those decisions. They aren’t concerned that Nauert will promote senseless, psychotic acts of military mass murder, they are concerned that she lacks the necessary qualifications to promote it skillfully and professionally. On this matter, as always, the self-proclaimed “resistance” is perfectly comfortable with the blood-spattered face of world-dominating imperialism. They just want it to go back to smiling and saying things politely.

The problem with most of the opposition to Trump is that they’re not interested in waking up, they’re interested in removing an annoying wrinkle in their bedsheets so that they can go back to sleep. They don’t care about the monstrous acts of violence that are inflicted upon human beings on the other side of the globe in their name, so they focus on irrelevant nonsense like whether or not Heather Nauert is qualified to read from the same imperialist script that was read by Haley, Samantha Power and Susan Rice.

Those who care about reality don’t care about who’s reading from that script. It is the script itself they seek to burn.

Reprinted with author’s permission from Steemit.