Ever had a cut in your finger and it hurts like mad? Well…

* This is a new form of punishment in one of the Saudi nations. According to reports sent to us from Arabia, this is a new punishment used on at least one person found to possess a bible [the image is an example of the damage]. The Iranian government announced new legal punishment tools under Sharia: an electronic saw is being used to cut off hands, fingers and feet.
And now shredders are implemented in some places for punishments.

Saudi Arabia has been short of head-choppers for their 2,500+ executions per year (PER executioner) and have been advertising to fill these dirty positions for quite sometime. An executioner is a job done by ‘lower status’ individual and is a position that is paid per execution by the government under confidentiality agreements. The government also provides the sword. The Saudi government has been considering firing squads to fill the shortage of executioners. Executioners have said they are “proud to do God’s work”. But is it a god or a man who sentence these people, without a fair trial, tortured into confessions? 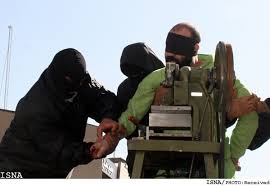 In January 2013 Iran published pictures of a new tool for cutting fingers and hands off people. The machine, resembling a saw, was used for the public amputation of an adulterer’s fingers on Wednesday. The images were published by on of Iran’s official press agencies. Apparently the machine has been used before, but it’s not clear for how long.